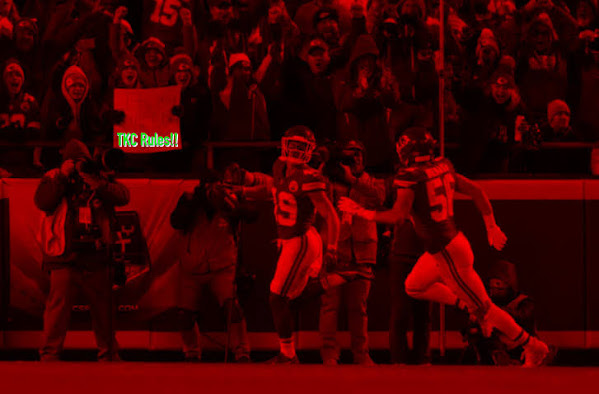 Tonight's victory was impressive but not totally convincing for diehard skeptics.

Of course, the highlight was Daniel Sorensen's interception and touchdown return that might not silence his critics but certainly proved to be one of the most memorable plays of this season.

Accordingly, we share news from the game as fans return from Arrowhead high on shared glory, beer and assorted meats & cheeses.

It's the Kansas City Chiefs and Denver Broncos Sunday night at Arrowhead Stadium.The Chiefs have won 11 straight against the Broncos.8:34 p.m. -- What a stop for the Chiefs defense!8:26 p.m. -- The Broncos go for it on 4th and 7 and pick up the first down.8:05 p.m.

From the very beginning, the Kansas City Chiefs (8-4) exercised strong-armed control of the game, quickly getting out to a 10-0 lead and never allowing the Denver Broncos (6-6) within less than seven points the rest of the game. Imperfect offense was complemented by opportunistic defense - which led to a 22-9 pounding on Sunday Night Football.

Patrick Mahomes had 184 yards passing with a touchdown run and an interception for the Chiefs (8-4), who now lead the Chargers by a game and the Broncos and Raiders by two in their race for a sixth straight AFC West championship.

Skip to main content The browser you are using is no longer supported on this site. It is highly recommended that you use the latest versions of a supported browser in order to receive an optimal viewing experience. The following browsers are supported: Chrome, Edge (v80 and later), Firefox and Safari.


Dan Sorensen gets a pick-six and Twitter goes bananas

The Kansas City Chiefs defense is having quite a night for themselves against the Denver Broncos, and it's clear they've kept all the momentum gained from the last month or more heading into the bye week.

The Denver Broncos had plenty of opportunities on Sunday night. But time and again, they couldn't capitalize. The Kansas City Chiefs cruised to a dominant 22-9 win over the Broncos on Sunday at Arrowhead Stadium behind a huge defensive showing, which gave them their fifth straight win and their 12th straight over the Broncos - a streak that dates back to 2015.

The Kansas City Chiefs defense had just done the improbable. The Denver Broncos, running the 20th play of their drive on fourth-and-2, called a run play for Javonte Williams. Linebacker Willie Gay Jr. met Williams at the line of scrimmage - with defensive end Melvin Ingram helping along - stopping the back in his tracks.

Hopefully, we'll have more for the mid-morning update . . . STAY TUNED!!!