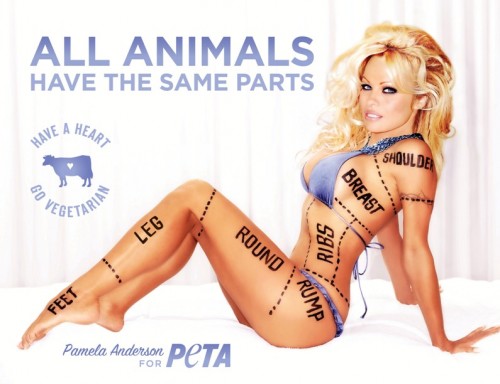 For what it's worth, we must give PETA credit for crafting some of the most iconic American marketing in their ongoing campaign to save animals.

Of course, their classic collab with Pamela is our fave.

Here's a peek at a holiday effort targeting a popular local pastime . . .

Kansas City, Mo. — Santa has a message for holiday travelers: You can avoid the “naughty” list if you put down that hunting rifle. His Yuletide greeting, courtesy of PETA, can be found on banners at the Kansas City International Airport through the end of December. The message comes after Missouri was identified as a top deer-hunting state. “When it comes to feeling pain and fear, loving their families, and valuing their own lives, deer are no different from you and me,” says PETA President Ingrid Newkirk. “PETA’s cheeky cartoon encourages people to stay off the ‘naughty’ list and give wild animals some peace on Earth by saying no to hunting.”

Hunters kill millions of animals every year and injure many others, allowing them to escape only to die slowly and painfully from blood loss or starvation. Orphans of parents killed by hunters are left vulnerable, too. Hunters have contributed to the extinction of species all over the world, including the Tasmanian tiger and the great auk.

PETA—whose motto reads, in part, that “animals are not ours to abuse in any way”—opposes speciesism, a human-supremacist worldview. For more information, please visit PETA.org or follow the group on Twitter, Facebook, or Instagram.