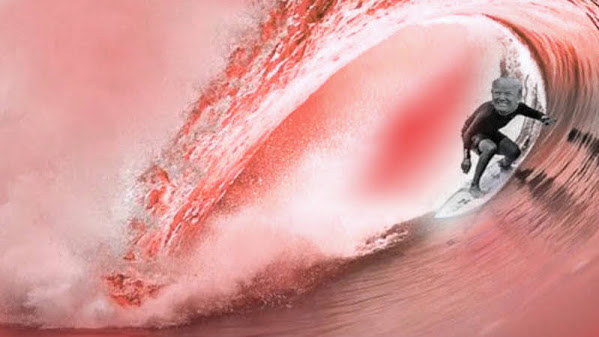 Like most of their content, a recent op-ed from The Kansas City Star today was hot garbage.

The out-of-the-loop scribe took a moment to "introduce" us to Justice & Manny even though our blog community has been talking about their political contest for about a year.

It was hard to decipher the main point of the screed beyond the author's self-obsession but this might have been the money line . . .

"I felt a bit like I was privy to something clandestine, even at this public meeting where obviously they hoped the lawyer, whoever she is, would show up. It was clear those attending are excited about having their voices heard and also about a chance to speak from a political seat. They’re preparing to push hard for that. I couldn’t help wondering: Are Dems ready for what’s coming?"

We might talk about this more but the idea that a bunch of rubes out in Lake Lotawana are going to change nearly a century of municipal politics by way of mean tweets is laughable.

YES, THERE IS A GOP RED WAVE COMING AND IT'S GOING TO BE BRUTAL FOR SUPER MINORITY MISSOURI DEMOCRATS!!!

Again, we've been noting and warning as much for most of this year.

Accordingly, here's the newspaper coming late to the party and still tagging people as "mask-less" in a place where there is no mask mandate . . .

Conservative We The People group wants seats on every Kansas City-area council, board

Even better, we share FURTHER READING from better sources about the RED WAVE that's building momentum and is now undeniable . . .


Minorities and women are leading the red wave

For generations, the Democratic Party has taken the votes of women and minorities for granted. But on Nov. 2, voters sent a clear message: Don't count on it. Take Republican Winsome Sears , Virginia's Lieutenant Governor-elect. She's the first Black woman elected to hold statewide office in th e commonwealth's 400-year history.

Today, everything is different. Pretty much every single indicator that pointed to a Democratic wave in the 2018 midterms now points to a Republican one in the 2022 midterms.