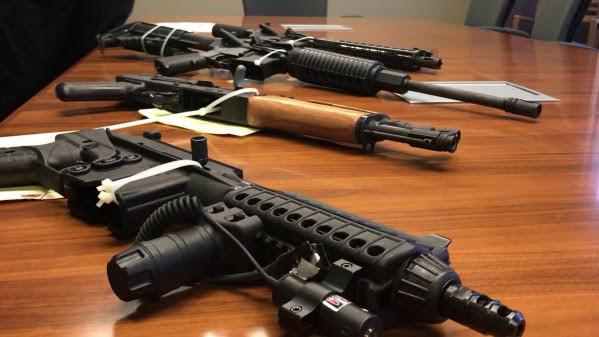 More interestingly, here's an important roundup on the sitch so far . . .

Police say so far this year more than 600 guns have been reported stolen from vehicles, a 19 percent increase over last year.

Police say nearly two guns a day are reported stolen in the city, and that may just be the tip of the iceberg because Missouri does not require owners to report that their firearms have been stolen.

Police say stolen guns are likely to later be used in shootings or homicides.

Hotspots for gun thefts include the streets around Westport, the Power and Light District and other entertainment areas.

Nearly 100 guns have been stolen from vehicles parked around the Westport Entertainment District this year, which is a huge problem for police and the city.

KANSAS CITY, Mo. - More people who carry guns in their vehicles are reporting them stolen, according to police. Police say these gun thefts are fueling violent crime throughout the metro area. Capt. Sean Hutcheson says relaxed gun laws in Missouri have resulted in more people carrying guns in their cars, and that's given criminals easier access to deadly firepower.