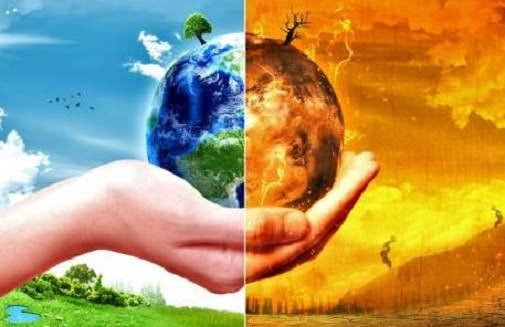 We've talked about this story before but a national mag picking up coverage makes a better case for the help that's being offered young activist.

Reality . . . It's must be hard warning people about the fate of the planet and meeting with nothing but mockery, denials and outright hostility from people who have their own mental issues and or special interests in spraying their filth into the air until it chokes us all.

And don't even get me started on the curious threat from bovine gasses that could drive just about anybody crazy if they think about it for too long.

Accordingly, some support for activists taking up a thankless crusade seems like a worthy idea.

Moreover, just take a peek at all of the negativity and hateration on this blog among people who mostly agree and the idea that young activist might need help and emotional/mental support isn't so strange after all.

Whilst it's fair to debate "eco-anxiety" and its consequences . . . There is no doubt about the impact of cruelty of the modern-day discourse and the effect it can have on those who participate in political conversations.

Hint . . . Don't make too much fun because from looking at the comments on TKC from time to time, it's clear that a lot of people who participate on this blog also might benefit from a head check.

She wanted to teach them the coping strategies she had learned after her son's death, so she created a Kansas City-based nonprofit, the Resilient Activist. The organization's website explains that Kevin's death occurred "when eco-anxiety (fear about the ecology of the planet) and solastalgia (grief over loss of beloved places in nature) combined with his own inner demons and he took his own life." The Resilient Activist offers mental health resources, community-building programs, consulting and other psychological resources for the environmental community.

"We need activists who have the resilience to see us through these difficult times," she said. "That's what I wanted to give. It's like, what would have helped him and others like him."

As climate worsens, environmentalists grapple with the mental toll of activism

While growing up in the '90s in Johnson County, Kansas, in a suburb of Kansas City, I had a friend, Kevin Aaron, who was a dedicated environmentalist. To strangers, Kevin appeared to be a laid-back punk-rock music fan with a dry and slightly mischievous sense of humor, but those of us who knew him best saw his passion for sustainability blossom during high school.