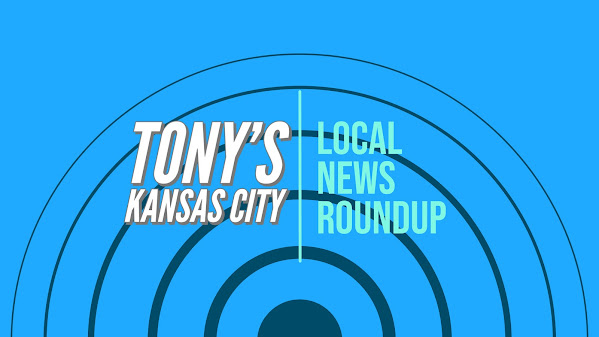 We've got more fun coming up but for our friends who rise before the sun we share this peek at pop culture, community news and top headlines . . .

Kansas City Police Chief Rick Smith continues to be surrounded by controversy - between conflicting reports about his retirement and increased calls for him to be fired immediately after audio of him calling the victim of a police shooting "the bad guy" surfaced. Plus, what we know about the omicron COVID-19 variant following its discovery in Missouri.

Hide Transcript Show Transcript TRIBUTES AND CONDOLENCES AFTER THE DEATH OF BOB DEOL ARE COMING FROM MANY PEOPLE FROM PRESIDENT BIDEN ON DOWNND A MICHAEL MAHONEY IS JOINING US NOW. YOU COVERED DOLE OVER MANY YEARS OF YOUR CAREER. WHATO D YOU REMEMBER OF YOUR INTERACTIONS WITH HIM?

KANSAS CITY, Mo. - Megan Abbott is a child life specialist at Children's Mercy Hospital. Abbott and all the fully vaccinated employees at the hospital wear a green badge while at work which grants them access to rooms and certain patients. But the green badge is often overshadowed by many workers seeing red due to frustration.

President Biden will travel to Kansas City on Wednesday to discuss his new bipartisan infrastructure package, the latest stop in the White House's campaign to promote his signature legislative accomplishment. The White House said that the president will "discuss how the Bipartisan Infrastructure Law delivers for the American people by rebuilding roads and bridges, upgrading public transit, replacing water infrastructure, and creating good-paying, union jobs."

Viral 'scrunched booty' Amazon leggings are back, on sale for up to 30% off

NY Post may be compensated and/or receive an affiliate commission if you buy through our links. Get your booty in gear if you want in on this sale. The viral "scrunch-butt" leggings from SEASUM popped up yet again, making a peachy appearance on Amazon's sale page.

Most Democrats are worried that Biden's flagging polling numbers - with an approval hovering in the low 40s - will lead to a thrashing at the ballot box.

In remarks to diners at his Mar-a-Lago resort in Florida on Saturday night, Donald Trump called the American media "crooked bastards" and Gen Mark Milley, the chairman of the joint chiefs of staff, a "fucking idiot". The meandering, foul-mouthed speech to Turning Point USA, a group for young conservatives, was streamed by Jack Posobiec, a rightwing blogger and provocateur.


Testimony Against The Squad

Kamala Harris described as a 'bully' and 'soul destroying' boss

Vice President Kamala Harris is described as a "bully" in a new report that brands her as the "common denominator" behind a recent exodus of high-level staffers. Harris' allegedly "soul-destroying" management style was revealed by staffers to The Washington Post just days after spokesperson and longtime aide Symone Sanders announced her departure.

Good morning. Dismissing as "preposterous" a Republican senator's claim he is "overhyping" Covid-19 as he did HIV and Aids, Dr Anthony Fauci said on Sunday the threat to the US from the Omicron variant remained to be determined - but that signs were encouraging.

MOSCOW, Dec 6 (Reuters) - Russia said on Monday it was reinforcing its military base in Tajikistan with 30 new tanks and that its forces at the facility had carried out exercises with missile defence systems, highlighting Moscow's concern about turmoil in Afghanistan.

Some protesters threw fireworks at police officers, who intervened with tear gas and water cannon. Demonstrators are mainly opposed to the use of Covid passes, which stops the unvaccinated from entering venues such as restaurants or bars. This comes after fresh protests in the Netherlands against new lockdown rules.

US Rep. Thomas Massie is drawing criticism after tweeting a photo of him and his family holding guns in front of a Christmas tree, just days after four teenagers were killed in a school shooting in Michigan.

Adult star Lisa Sparks has left the Internet aghast with her recent claims that she allegedly achieved the world record for sleeping with the highest number of guys in one day, although she didn't have the finest experience. Lisa managed to bed 919 guys during the 2004 Eroticon event in Warsaw, Poland.

Patrick Mahomes Believes in Receivers: 'They Just Have to Be Themselves'

Against the Denver Broncos, Kansas City Chiefs quarterback Patrick Mahomes posted one of the most unassuming stat lines of his career. He completed just 15 of his 29 pass attempts for 184 yards, no touchdowns and an interception. He was far from the main problem against the Broncos, in a win, but he also didn't quite look like himself.

As expected, the Kansas City Chiefs' defense and running backs made all of the big plays during a primetime victory over the Denver Broncos. The final score was 22-9 - but if the passing offense could have been more effective, it could have been an even bigger blowout.


Worth Another Look From The Library

In recent weeks, groups in Texas, Virginia, South Carolina, and right here at home in Cass County, Kansas City's Northland, and Wichita have worked to remove dozens of books from shelves, keeping them out of reach of the nation's youngest readers.


Read Something Other Than Your Stupid Phone

About a year ago, Kelly Stromberg was spending Christmas at home with her husband when he asked her what she wanted to be when she "grew up." As a housewife raising three children with a husband in the Navy, Stromberg's family moved around a lot over the years.

Warmer and a bit windier today. Clouds moved in overnight as did a southerly wind. That wind has been bringing warmer air into the area and we've been warming up since midnight. Temperatures to start are in the 40s and 50s. We'll warm into the low-60s later this afternoon.

Jack White – Taking Me Back is the song of the day and this is the OPEN THREAD for right now.