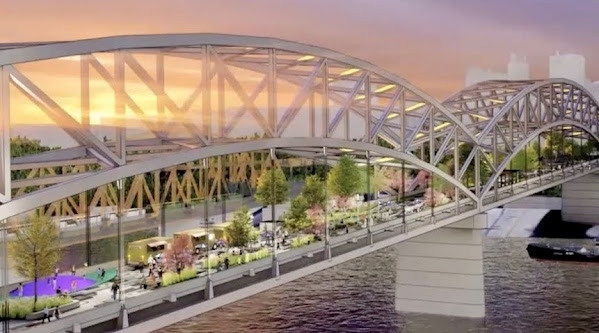 To be fair, the thought of losing the historic old school bridge and replacing it with a glorified on-ramp designed with absolutely no imagination is painful.

But the plan seems like the same kind of unworkable garbage the council dude Eric Bunch usually devises and this latest fantasy could be his best reelection gambit to impress Twitter pals.

A bit of description and some IMPRESSIVE funding awards that will be generously awarded . . .

The Buck O’Neil Bridge idea remains in its “infancy” and the next phase will be obtaining the $300,000 from MoDOT for the feasibility study. It would require participation from the railroads, Army Corps of Engineers, the Coast Guard and other local governments.

At this point, the only city expenditures exploring the idea has been planning staff time.

Should the proposal move forward, it would cost about $2.7 million to prepare design documents, according to the city.

A proposal to convert the old Buck O'Neil Bridge into a linear park with dramatic downtown views is being described as a top priority at City Hall, but key questions remain about its ownership, cost and operation.