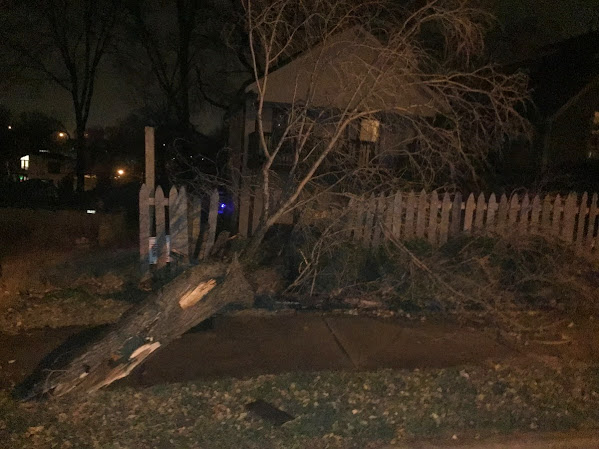 On the bright side, it's hard to hear anybody talking in the wind.

Here at TKC we absolutely HATE leaving our basement HQ but on a brief jaunt around the KCMO urban core we notices some very real high wind impact . . . Also, don't clown our jaunting!!! We recently read a neat article about "friluftsliv" and it only took one try to figure out that it doesn't work for an angst-y civic blogger.

We took more than a few pix but this downed tree about 5 blocks away has a nice bit of contrast and seems appropriate for tonight along with relevant news links on the weather and politically charged fear of the sky falling . . .

KANSAS CITY, Mo. - Pounds of sheet metal lies across the front of Hangar Two at the Charles B. Wheeler Downtown Airport. Richard Anderson who was inside says a fourth of the roof came off a little after 6 p.m. "Everybody is okay. I was one of them, I was in when it went," Anderson said.

The strong winds have carried smoke from central Kansas wildfires into the Kansas City area.Fire departments around the metro have been called on reports of the smoke.The Overland Park Fire Department said it has received numerous calls to investigate the odor of smoke in the area.

KANSAS CITY, Mo. - During the day on Wednesday, before the worst of the wind-powered severe weather, people out-and-about were trying to take advantage of the unseasonably warm weather. But even before severe storms moved in, some of the damage started. In the mid-afternoon, a giant tree crunched a single-story home in Overland Park.

All staff in the tower cab at Kansas City International Airport have been evacuated for their safety amid high winds and thunderstorms around 5:50 p.m. FAAn staff were permitted to reenter and the airport was set to reopen around 6:45 p.m.


More Tornadoes Could Be Coming for the Central U.S.

(Bloomberg) -- A powerful storm ripping across the U.S.

KANSAS CITY, Mo. - The Midwest has been exposed to extreme weather conditions rarely seen in December. On Wednesday, Dec. 15, Kansas City recorded temperatures in the 70s and a high wind warning was issued.


Evergy: It could take days to restore power to hardest-hit places in Kansas, Missouri

Evergy said it could take days to restore power to customers in its service area affected by Wednesday's destructive winds and thunderstorms.As of 8:30 p.m., the company said about 189,000 customers - 108,000 in Kansas and 81,000 in Missouri - were without power.

KANSAS CITY, Mo. - The western Kansas wildfire smoke blowing into the Kansas City area has significantly lowered the air quality level. Airnow.gov reports the Kansas City metro's air quality went from good to unhealthy for sensitive groups around 7 p.m. Wednesday. If you are smelling and seeing smoke, it is from a wildfire in Russell County, Kansas.