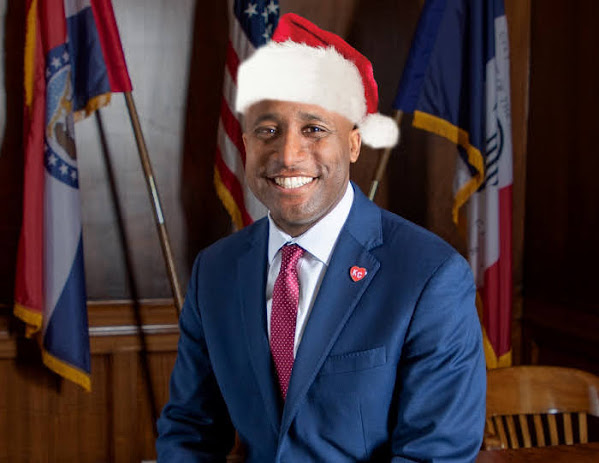 We have a special treat for our blog community this morning and a sign of shifting political tides in Kansas City . . .

This one comes our way via a holiday message from one of the many KICK-ASS INSIDERS who still read this humble blog . . .

MAYOR Q SUFFERED A DISMAL HOLIDAY AS FAR AS CAMPAIGN DONATIONS ARE CONCERNED!!! MANY LONGTIME SUPPORTERS OPTED OUT OF GIVING TO THE CITY HALL HONCHO AFTER THE FAILED PALACE COUP AGAINST THE CHIEF OF POLICE!!!

"The local donors are walking away and that's why we've seen Mayor Q reach out and try to take his case to DNC friends on a national level. In Kansas City there have been two major law firms who are offering their partners 'guidance' against giving to him. And the country club set seem to be looking for a challenger to fund."

"Mayor Quinton Lucas has just created too many enemies. From the airport to police and the COVID crackdown on small business . . . There just isn't a lot of love for the guy this holiday."

"For a candidate with connections and a path to to some serious level of funding . . . There's definitely an opportunity. As far as locals are concerned, people are turning their back on the guy . . . And that's surprising."

According to the latest available campaign finance report the Mayor has around $262K on hand and that's actually more than former Mayor Sly banked at this point in his cruise to reelection.

However there's reason for a moment of doubt . . . Again, according to the latest Missouri campaign finance reports, Mayor Q banked less than 50 grand during 2021 and that's an abysmal total. Last year, even during a pandemic, he earned DOUBLE that amount.

Few locals in KCMO understand how the politics of this cowtown REALLY works.

Hint: Just like every other part of the world . . . It's all about money. It's just a bit more passive aggressive than most places.

Local corporations treat elected officials like loser children and typically send cash their way for the holidays. The Mayor of KC usually CLEANS UP WITH CHRISTMAS DONATIONS and that's the crux of insider news we're getting . . . Local leaders played the Grinch this year with Mayor Q and its mostly due to his anti-police machinations along with a growing list of miscalculations and other political sins.