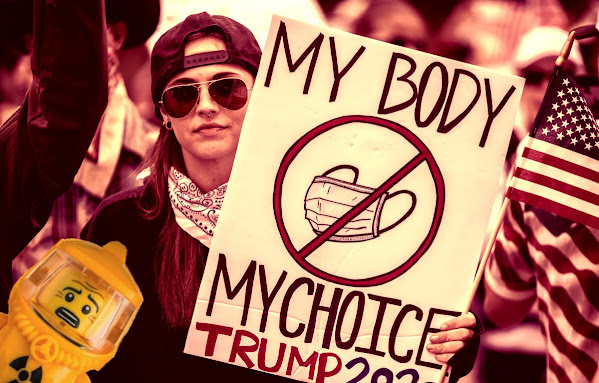 Despite dire warnings about the uptick in COVID cases, a mask mandate proposal the Courthouse was defeated today amid widespread protest.

Some of our readers suggest the drama was overplayed. However, the close vote suggests that quite a few politicos were more serious about restarting the public health dress code crackdown.

"Jackson County, as well as the surrounding counties, are classified as high transmission areas," Bridgette Shaffer, director of the Jackson County Health Department, told legislators before the vote.

"Politics is temporary; health care is forever. So we just have to remember that this is an issue that has become publicized and politicalized," White said.

"I think we have to do everything we possibly can to save lives," Jackson County Legislator Ronald Finley said.

But not everyone agreed with the idea during Monday's meeting.

"There are a number of issues with this legislation that makes it even inappropriate for us to consider a vote on. First of all, it is against state Statute 67.265, which places a 180-day prohibition on expired or terminated health orders," Jackson County Legislator Jeanie Lauer said.

The vote FAILED and Jackson County won't be forced to mask up any time soon.

KANSAS CITY, Mo. - The Jackson County Legislature voted against a mask mandate Monday morning. The resolution failed by a vote of 5-4. Supporters of the resolution cited an increase in COVID-19 cases in the county as one of the reasons the mandate was necessary.

KANSAS CITY, Mo. - In the last scheduled meeting of the year for the Jackson County Legislature, the body voted against reinstating a county mask mandate for 30 days. The legislature voted 5-4 against a new 30-day mandate. The mandate would have been in effect until Jan. 12, 2022.

Efforts to reinstate a mask mandate to curb the spread of COVID-19 in Jackson County, Missouri failed in the county commission Monday.The commission defeated resolution 20844 in a 5-4 vote.If approved, that resolution would have required indoor masking for people ages 5 and up in the county.