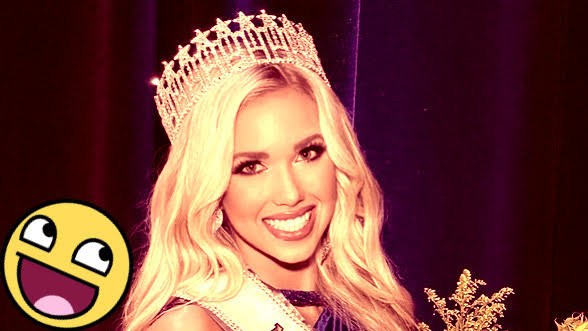 We can only hope that this silly sentiment from a locally connected heiress gives a local worker a good laugh.

Here's your future hottie boss attempting to convince her lessers that she has earned at least a smallish portion of her good fortune . . .

Gracie Hunt, 22 — who is the daughter of billionaire Kansas City Chiefs chairman and CEO Clark Hunt — won the Miss Kansas USA title in April and went on to place in the top 16 at Miss USA last month.

But pageant queens can't just rely on their good looks to win crowns, and Gracie told the New York Post this week that there was quite a bit of training involved — including perfecting her pageant walk.

Gracie Hunt, 22 is the daughter of billionaire Kansas City Chiefs chairman and CEO Clark Hunt She won Miss Kansas USA in April and made it to the top 16 in the Miss USA pageant last month Gracie, whose grandfather was American Football League founder Lamar Hun, treated training like