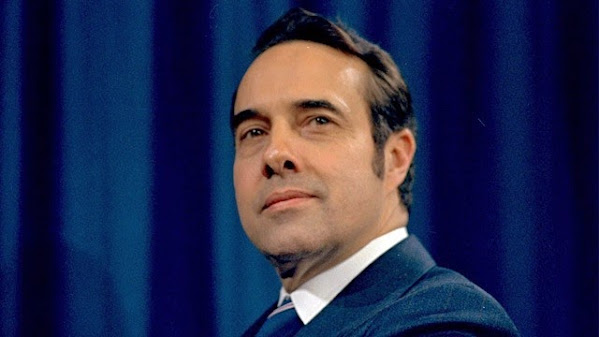 A Kansas political legend has passed.

Here at TKC we remember the legendary Senator for his ethics and integrity.

We also respected his longtime role in the GOP as party enforcer who demanded unity from his colleagues down ballot.

More than anything, after hearing an obscure interview about it, we were always intrigued that he often referred to himself in the 3rd person in order to separate his personal identity from his public life as an elected official.

And, his work as a salesman was notable if only because it helped drive home the fact that American politics was evolving into something beyond policy making.

A few more perspectives as we invite TKC readers to weigh in . . .

Bob Dole, a Republican Party stalwart and presidential hopeful who espoused a brand of plain-spoken conservativism as one of Washington's most recognizable political figures throughout the latter half of the 20th century, died Sunday.

Bob Dole, a World War Two veteran who went on to be a long-time Republican senator and US presidential candidate, has died aged 98. His death was announced in a statement from the Elizabeth Dole Foundation: "It is with heavy hearts we announce that Senator Robert Joseph Dole died early this morning in his sleep.

KANSAS CITY, Mo. - The tributes are pouring out both nationally and locally for former Kansas Sen. Bob Dole, who died early Sunday morning. House Speaker Nancy Pelosi ordered the flags at the U.S. Capitol to be flown at half-staff to honor Dole.

Bob Dole, who overcame war wounds to dominate Kansas politics for much of the 20th century and nearly capture his nation's presidency, has died. He was 98. The death of the former U.S. senator and Republican nominee for president was announced by the Elizabeth Dole Foundation. The announcement did not say where he died.

"It is with heavy hearts we announce that Senator Robert Joseph Dole died early this morning in his sleep," a statement from the Elizabeth Dole Foundation read on Sunday Bob Dole, the 1996 Republican presidential nominee and longtime leader of Senate Republicans, has died. He was 98.


Bipartisan tributes flood in for "giant of the Senate" Bob Dole

Republican and Democratic politicians, including former Senate colleagues, are sharing condolences and memories commemorating the life of Bob Dole, who passed away at 98 on Sunday morning. The big picture: Dole, the Republican presidential nominee in 1996, was the longest serving Republican leader in the Senate until 2018, when current Senate Minority Leader Mitch McConnell surpassed his record, What former colleagues are saying: "Bob was an American statesman like few in our history.

Former U.S. Sen. Bob Dole, who will be remembered for the tenacity that defined his career and his work on behalf of fellow military veterans, died Sunday morning in his sleep. He was 98. In his memoir, "One Soldier's Story," Dole wrote that his experiences in World War II defined his life.