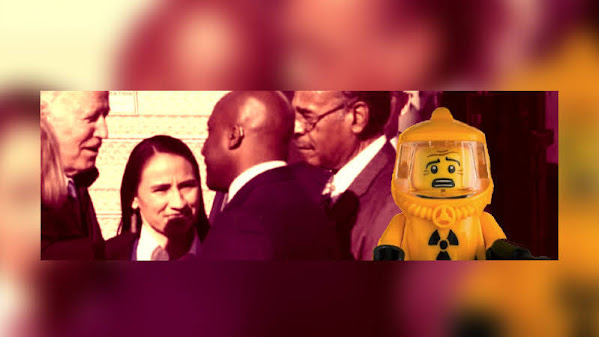 I'm sorry . . . This visit was possibly one of the most BORING Presidential tours to this cowtown in more than a generation.

At least Prez Obama had the decency to visit a few local places outside that real people inhabit.  To be fair, Prez Biden's team did send for Gates BBQ takeout.

The plans "revealed" are all pie in the sky garbage that focus on RAIL TRANSIT and electric toys for rich people along with a few token hand-me-downs for the desperately impoverished.

For those of you without a memory, let's not forget that former Prez Obama also promised green bus transit when he was in Kansas City and that idea COMPLETELY FLOPPED and left more than few bankrupt companies owing MILLIONS upon their demise.

DOES ANYBODY REALLY WANT TO TAKE THE BULLET TRAIN FROM KANSAS CITY TO STL?!?

There's a reason there's only one lonely Amtrak assigned to that route.

This is urban planning for people so disconnected with reality and the voting public that they're starting to believe their own propaganda -- A dangerous proposition that usually happens to formerly great boxers right before they're knocked out.

To be fair, the upside of today's coverage is that The Kansas City Star must've filed more than two dozen stories on the President's visit that were mostly untouched by the plebs.

A quick check reveals that most local "news" didn't even mention the word or concept of INFLATION in relation to all of these grand schemes and that means that most of their content isn't really journalism (lulz) it's more akin to public relations at best and/or the mad ravings of a publicity agent in most cases.

We'll dump all of the local "news" about Prez Biden in this post with a caveat . . . TODAY'S FAR TOO KIND KANSAS CITY VISIT COVERAGE IS WHAT STATE-RUN MEDIA LOOKS LIKE and it's why a growing number of adults don't trust the news, stopped believing in Democracy and would rather play video games.

KANSAS CITY, Mo. - President Joe Biden gave a speech on the changes his new infrastructure bill will bring to the country Wednesday at the Kansas City Area Transportation Authority headquarters in Kansas City, Missouri. The president outlined his "Building a Better America" campaign, and remarked on the current state of infrastructure in Kansas City.

A number of people gathered at 18th and Paseo during the president's visit today, blocks from where he spoke.

President Joe Biden laid out a sweeping plan for the future of American infrastructure against the backdrop of the Kansas City Area Transit Authority during a visit to the city on Wednesday. "We've always been a nation of possibilities," he told a small crowd inside the Kansas City Area Transit Authority bus barn, explaining in broad strokes how the $1 trillion infrastructure plan could be implemented.

The president delivered a two-pronged speech in Kansas City. He talked up the infrastructure bill, often citing local examples of how it would help, and he pushed his Building A Better America plan.President Joe Biden spoke at the metro bus service's main garage, which is often called the ATA barn.In the back, there were three electric buses of the ATA's fleet.

KANSAS CITY, Mo. - President Joe Biden is rebranding his bipartisan infrastructure package with the slogan "Building a Better America." The White House unveiled the new slogan as Biden headed to Kansas City, Missouri, to promote the $1 trillion infrastructure deal. It's Biden's first visit to the state as president.

Look before I began, I'd like to say a word about a friend of mine. We lost this weekend, Man, if you. Hours west of Russell Kansas came from our, not far from here Russell Kansas. A lot of americans today remember bob dole is a presidential candidate, but for families he represented across the border.

KANSAS CITY, Mo. - Before he got into the topic of infrastructure during his visit to Kansas City, Missouri, on Wednesday, President Joe Biden took the time to pay tribute to former Sen. Bob Dole and Buck O'Neil. Dole, on Sunday morning, was a longtime friend of Biden's during his time in Congress.

Taking the podium at the Kansas City Area Transport Authority on Wednesday, President Joe Biden touted the passage of his infrastructure bill, as part of a tour promoting one of his administration's top goals. The package of infrastructure priorities comes with a price tag of $1.3 trillion, and is designed to focus on a series of long-term projects for the nation.