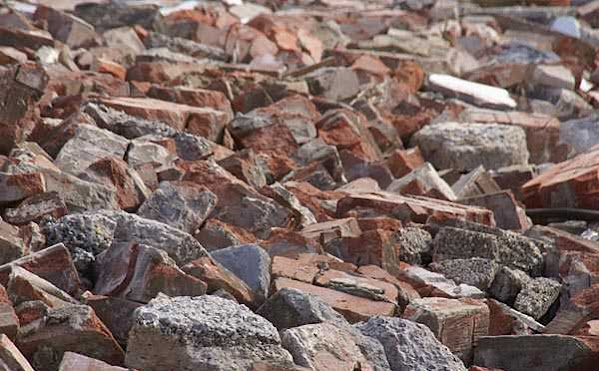 Early this morning there was rampant speculation online about the deets of this crash.

We thought it was best to wait for some official word.

Here's the best round-up and overview of the tragic situation for the midday . . .

A Kansas City Fire Department truck was heading northbound on Broadway Boulevard near Westport Road on the way to a house fire shortly after 10 p.m. The fire truck then collided with a Honda CRV that was traveling westbound on Westport Road. Both vehicles ended up crashing into the building housing the former Riot Room music venue.

The man and woman inside the SUV died, along with a woman who was on-foot at the scene. That pedestrian's body was pulled from the building's rubble shortly before 8 a.m. Thursday following an extensive recovery effort.

So, anybody familiar with that intersection knows the physics of the official story don't make any sense unless you're willing to believe that a tiny Honda SUV can push a firetruck more than a 100 ft.

Fun fact: An average fire truck can weigh anywhere from 19 to 30 tons. A Honda SUV curb weight is listed at 5,000lbs tops.

It'll be interesting to watch that story "evolve" over the next few weeks.

KANSAS CITY, MO (KCTV) -- Three people were killed late Wednesday night after a fire truck collided with an SUV and crashed into a building in Westport. A Kansas City Fire Department truck was heading northbound on Broadway Boulevard near Westport Road on the way to a house fire shortly after 10 p.m.

Three people were killed Wednesday night when a Kansas City firetruck responding to an emergency call collided with a Honda SUV, collapsing a block of buildings in Westport. According to Kansas City Police, a Kansas City Fire Department pumper truck was headed northbound on Broadway around 10:30 p.m., and hit a Honda SUV going westbound at the intersection near 40th Street.


Three dead after KCFD firetruck crashes into building in Westport

KANSAS CITY, Mo. - The Kansas City, Missouri, Fire Department is "cooperating fully" with police on the investigation into a crash involving one of its fire trucks which left three people dead and a building partially collapsed. A crew from Station 19, located at 43rd and Pennsylvania, was responding to a fire call when the crash happened around 10:25 p.m.