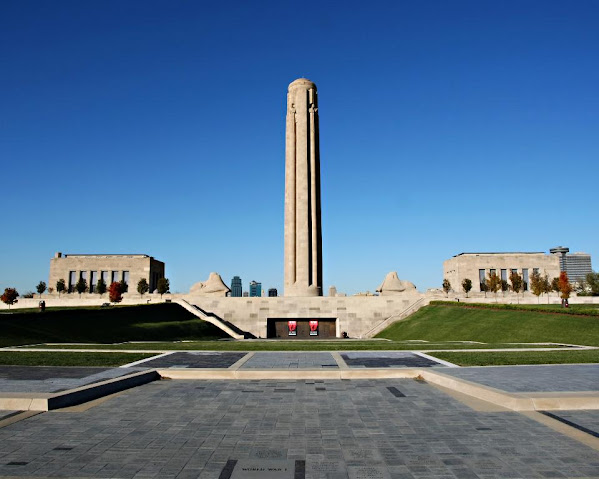 The economy is garbage right now and those of us with even a modicum of perspective on history know that war has provided the only reliable exit from financial peril for most Western nations.

And, maybe, a good old fashioned bombing campaign might one of many reasons why our MSM is so eager to stoke the anger of Americans.

One of our favorite things about Kansas City is that the WWI memorial which stands before the skyline of this town has proudly served as not only a notorious hookup spot for random gay sex but also as an ANTI-WAR MEMORIAL.

Look at the inscriptions and the signage closely.

Everything about the memorial serves as a deterrent and caution against future wars.

At the time, there was a hope that WWI was "the war to end all wars" but like most political slogans: That was just another lie.

War seems like a horrific state of the human condition and global affairs.

And so we're circumspect as we notice so many chest-thumping and prideful missives about veterans today.

The U.S. loves veterans of foreign wars so much that we keep making more . . . And that cycle doesn't really show any sign to stopping in the future.

We'll have a happier post about Veteran's day later but for now this note about hype for the holiday should suffice . . .

KANSAS CITY, Mo. - The National World War I Museum and Memorial has a full Veterans Day schedule of ceremonies and observances to commemorate the 103rd anniversary of the signing of the Armistice ending the war, as well as the 100th anniversary of the site dedication making Kansas City the country's home for learning about the conflict.

Pvt. Henry Johnson, a Harlem Hellfighter and World War I hero, was denied recognition by the U.S. military until decades after his death. For Veterans Day, a mural at Kansas City's World War I Museum and Memorial immortalizes Johnson's story.

by: Darcie Loreno, Nexstar Media Wire Posted: / Updated: Note: Most businesses require proof of military service, and the deals include participating locations only. It's recommended that you call specific locations to make sure they are taking part in the promotions. Thursday, Nov.