Sadly, it seems that so many housewives, Northland neighbors and seniors don't want to GET SERIOUS about local politics.

Just as this blog community predicted, their latest recall effort was DOOMED to failure.

To begin the recall process, a voter from the elected official’s district must file an affidavit that includes the name of the official, their office and the grounds for removal. The city clerk then makes copies of the petition papers for distribution. After filing the affidavit, organizers have 30 days to gather signatures for the KC recall petition. If the petition drive succeeds, the city determines a recall election date."

With the cold weather, we can only hope they take a break for their own sake . . . 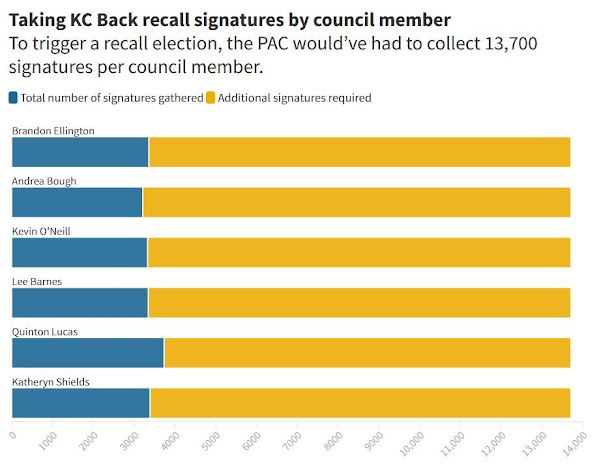 “It’s shameful, however not surprising, that local media only has interest in the effort when they believe that we failed. That said, efforts to expose and remove Kansas City of this corrupt individuals will most definitely continue.”

It's not shameful at all for voters to expect activists of any sort to back up their tough talk with results.

We stopped taking this group seriously when they didn't meet the tiny threshold to recall In-District Council Dude Eric Bunch.

Moreover, we know more than a few of the organizers and they were constantly told that their efforts would have been better spent organizing voters, neighborhoods and communities for future candidates in the next election cycles.

Sadly, what we've seen from this group and so many in the Northland political neophytes is that it's much easier to stir up hateration, garner donations and attention than to actually fulfill political promises.

Thankfully, there are Northland voters who take this kind of stuff seriously and "word around the campfire" is that they view this group with more than a bit of condescending charm and don't want to discourage the useful idiots . . . In that respect, they should "JOIN THE CLUB!!!" of most TKC denizens, local voters, and cowtown malcontents who don't feel like they have much in common with their elected leaders.

Taking KC Back needed 13,700 signatures per council member to start a recall. They collected fewer than 4,000 for each.

Even with a sharp increase in donations, the political action committee Taking KC Back has again failed to prompt a recall election in Kansas City, Missouri.