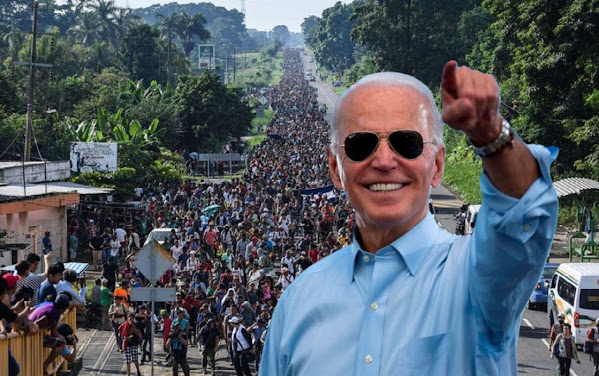 Sorry, but if TKC uses the term "illegal aliens" in the post title headline my mom will start throwing shoes at me as I inevitably leave the basement . . .

Americans paying college tuition for illegals/undocumented sparks resentment and anger amongst even the most compassionate conservatives.

For instance, the conversation about reparations for illegal aliens threatens to spark a right-wing revolution in states along the Southern U.S. border . . .

President Biden flared in anger Saturday as he spoke in favor of his administration's plan to award $450,000 payments to migrants separated from their families after illegally crossing the US border - three days after he called a report on the payouts "garbage."

American high school students are confronting a horrific opioid crisis, COVID online class switcheroos, a bitter debate over CRT and worsening economic prospects . . . It's not unreasonable that the idea of ambitious undocumented/illegal immigrants earning support for higher education would spark some level of bitterness.

It's better to acknowledge the inevitability of those feelings rather than rebuke them outright and without conversation.

Fact is . . . College and universities are becoming impractical for a larger number of workers and financial aid is ALSO available for American students in the form of loans that won't embitter scholars until their late thirties -- When it's far too late to do anything about . . .

Here's the money line from a hopeful missive . . .

For undocumented students, some of the conventional paths to finding college financial aid don’t apply.

They are excluded from many forms of state and federal aid, and even some private scholarships. But opportunities do exist, and there are resources to help you find them.

“When (undocumented students) feel defeated, it’s like, OK, well, let’s talk about what we do have access to,” said Alejandra Pérez, director of the scholarship program at the Greater Kansas City Hispanic Development Fund. “And just don’t give up.”

Does NPR have a lot of undocumented listeners???

Judging by the sounds coming from some of my favorite barrio dives . . . My guess is no. And so most of this report merely hopes to assuage white guilt or serve as fodder to annoy any manual laborers who come into contact with local progressives . . . Good times.

Federal and state aid aren’t options for undocumented students in Missouri and Kansas, but they can still find scholarships to pay for college.