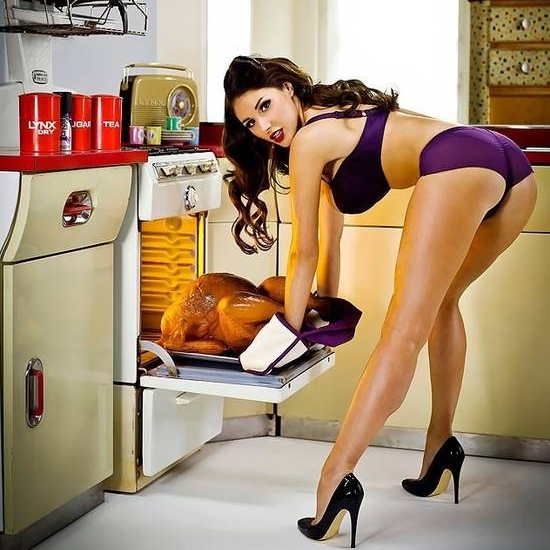 Our holiday tradition is sharing this iconic image of hottie Lucy that was actually banned back in 2011.

Nevertheless, we persist in offering an alternative peek at the local discourse.

Excitement is building for the Evergy Plaza Lighting Ceremony tomorrow night. Especially for members of Kansas City's professional women's soccer team, the KC Current, who will be flipping the switch this Thanksgiving.Several homegrown players are especially honored to be taking part in the Kansas City tradition.Sydney Miramontez is No.

Rocky's World: The history of Thanksgiving Day football and the Chiefs

Thanksgiving Day football is part of the fabric of American tradition. It began on November 30, 1876, in Hoboken, New Jersey; it was cold and wet. The temperature was in the low 30s and rain fell from the sky, but the turf was frozen so hard that it battered the players' bodies as they were driven to the ground.

KANSAS CITY, MO (KCTV) -- No people were hurt in a Thanksgiving morning house fire in Kansas City, but firefighters rescued two animals. Crews responded at 4:34 a.m. to a two-story house on Charlotte Street just north of 31st Street. Firefighters worked quickly to knock down the flames, and pulled two animals from the home---a cat and a dog.

KANSAS CITY, KS (KCTV) -- Court records reveal new details about a violent and deadly crime spree that involved a father being shot outside of his own KCK home and a brutal home invasion attack. Alyssa Leanne Arreola is charged in Kansas and Missouri for a long list of crimes including second-degree murder and attempted murder.

'Kansas City is not Kansas City without the Chiefs': Mayor Lucas joins mayors from across the country in thanking local NFL teams

by: Juan Cisneros Posted: / Updated: KANSAS CITY, Mo. - The NFL partnered with mayors from around the country ahead of Thanksgiving day to share why they are thankful for their local franchises. Mayor Quinton Lucas was among mayor thanking their teams for helping the community get through tough times throughout the pandemic.

Me, Myself & Di is a charming new British comedy that is well worth giving a go. To mark its release, we had the pleasure in speaking to its three leading roles, speaking to model-turned-actress Lucy Pinder, newcomer Katy Clayton, and James Lance (Northern Soul, Marie Antoinette).

President Biden's approval ratings have been epically low, but on a Thanksgiving Day stop at a New England Coast Guard station they suddenly reached the single digits. A Nantucket man presented Biden's motorcade with the middle finger Thursday as the unpopular commander in chief made the holiday stop during his stay at a billionaire's island compound.

Scottish courts have rejected a legal bid to force lawmakers to investigate Donald Trump 's purchase of his two prized golf resorts in the country. The nation's top prosecutor will now have to decide whether to pursue an investigation into how the former president paid for his Trump Turnberry course in 2014, and Trump International Golf Links near Aberdeen eight years earlier.

As the guilty verdicts were read aloud, one after the other, Ahmaud Arbery's mother, Wanda Cooper-Jones, could be seen in the courthouse with tears in her eyes. The three white men who murdered her son back in February 2020, claiming they had acted in self-defense during an attempted citizen's arrest, expressed little emotion.

Georgia Rep. Marjorie Taylor Greene, one of Donald Trump's staunchest allies in Congress, on Thursday laid out demands for a GOP leader to earn her vote for House Speaker if Republicans are able to retake the majority after the 2022 elections and cast doubt on House Minority Leader Kevin McCarthy being elected to the position.

The World Health Organization is monitoring a new variant with numerous mutations to the spike protein, scheduling a special meeting Friday to discuss what it may mean for vaccines and treatments, officials said Thursday. The variant, called B.1.1.529, has been detected in South Africa in small numbers, according to the WHO.

Missouri dig site is home to at least 4 rare dinosaurs, and there could be more

Fossils from Missouri's state dinosaur, the duck-billed Parrosaurus missouriensis, were uncovered in October. The dig site could have more to offer.

MSNBC's Stephanie Ruhle rips Dollar Tree for blaming price hikes on inflation: They don't 'NEED' to do this

MSNBC anchor Stephanie Ruhle is taking Dollar Tree to task over its shocking announcement that the company was increasing its famously cheap prices. Dollar Tree confirmed this week it is charging $1.25 for the majority of its products at all of its locations nationwide by the end of April.

DON'T get us wrong - we love seeing our extended family over the Christmas holidays. But nothing kills the mood quite like knowing your loved ones can hear your EVERY movement on the old sofa bed. Sound familiar? Then Trojan Condoms has shared three ways to have super quiet sex over the festive season.

Patrick Mahomes kicked off his bye week with a night out with his future wife. Days after defeating the Cowboys, 19-9, the Chiefs quarterback and fiancée Brittany Matthews stepped out Tuesday for a dinner together. "Date night @patrickmahomes," Matthews captioned the post on her Instagram Story.

As the Kansas City Chiefs enter their bye week conveniently during Thanksgiving weekend, one of the franchise's top stars revealed his plan to help the community. All-Pro tight end Travis Kelce takes tremendous pride in giving back to the children in the Kansas City area, and his foundation focuses on making things better for all.

KANSAS CITY, MO - Time stood still inside the walls of prison for three men who are now working to regain their sense of normalcy after being exonerated. Kenneth Nixon spent 15 years and nine months behind bars, Marvin Cotton Jr.

Here's a round-up of Kansas City restaurant news for December 2021, including an exciting new lounge in the basement of the Hotel Kansas City and three big announcements in Westport, headlined by a thirteen-square-foot megaclub and a successor to the beloved Joe's Pizza window.

Hide Transcript Show Transcript THERE. NICK BUNDLE UP ROB IT IS GONNA BE COLD. WE HAVE TEMPERATURES THIS MORNING THAT AREN I THE 20S WIND CHILL VALUES. THEY'RE IN THE THIS MORNING A FAIRLY STRONG NORTHWEST WIND RIGHT NOW.

Thank You (Falettinme Be Mice Elf Agin) is the song of the day and this is the OPEN THREAD for right now.