Today the Kansas City Star reached a new low and they deserve to be confronted regarding their sordid misdeeds.

Admittedly, amid a great deal of afternoon excitement, TKC got a bit carried away with the talk of intrigue but now that the dust has settled we have finalized a post on the topic that features all of the mainstream reports and offers a full view of how the story played out.

And so we strive to give TKC readers the REAL DEAL from behind the scenes.

SCUMBAGS AT THE KANSAS CITY STAR PUBLISHED FAKE NEWS ABOUT THE CHIEF'S PLANNED RETIREMENT AND BACKED UP THEIR LIES WITH ACTIVIST RANTING!!!

Thankfully, about 45 minutes after the story broke, one of the best reporters in Kansas City myth busted their garbage using . . . JOURNALISM. 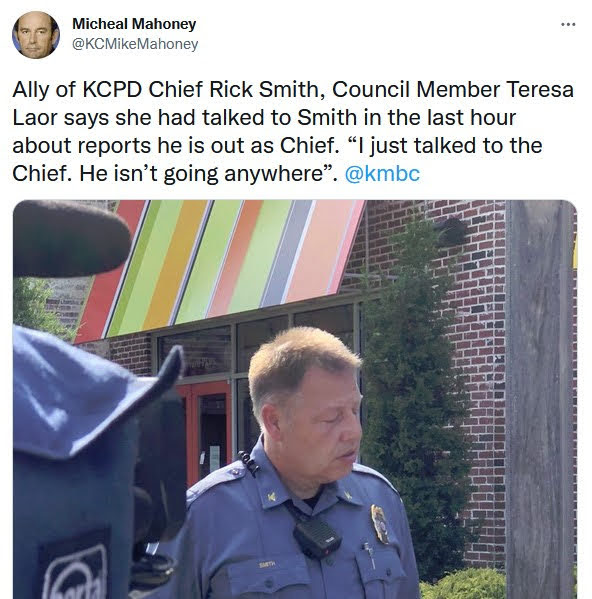 - Whilst the Cameron Lamb verdict isn't a good look for any department, upon second viewing, it didn't have any impact on the Chief's retirement.

- The Star is sticking with their FAKE NEWS STORY. In fact, the Chief will retire on his own terms.

TKC apologizes if there was any confusion from this blog in the heat of the moment but we hope this post serves a worthy clarification.

"It's just a very small group of assholes activists that continue to stir this stuff up. Including The Star. My guess is Q doesn't want the Chief having input on the budget. It will be a close to an election year for council and there should be a bit of trepidation for those running for reelection."

As we noted in our first post . . . The Chief will retire according to plan and at the conclusion of his tenure.

What we've learned from this drama is that the newspaper is desperate and quite a few activists know as much and have taken advantage of the newspaper's decline in order to further their agenda.