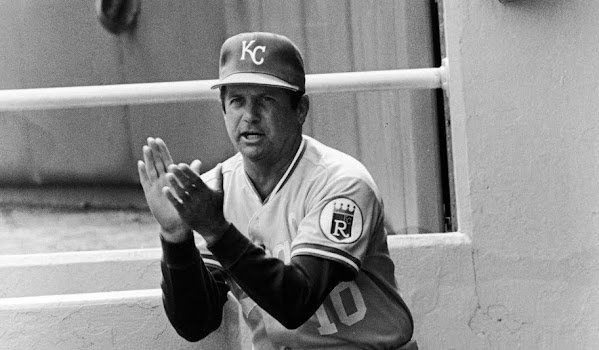 A worthwhile remembrance that's worth a look for Sunday night readers . . .

"The 1980 World Series team had basically been dismantled, either from age or drug use. Howser managed to scrap 90 wins out of the 1982 team and 84 wins from a bunch of youngsters in 1984. It all came together in 1985, as Kansas City held off the California Angels to take the American League West crown. They overcame three-games-to-one deficit against the Toronto Blue Jays in the Championship Series to advance to their second World Series. That series, as you well know, didn’t come easy either."

Remembering the career of Dick Howser

Where do we even start with Dick Howser? His life reads like a fairy tale. He was a small child, somewhat scrawny, and even though he was an excellent high school baseball player, coaches thought he was too small to play college ball. Undeterred, he walked on at Florida State.