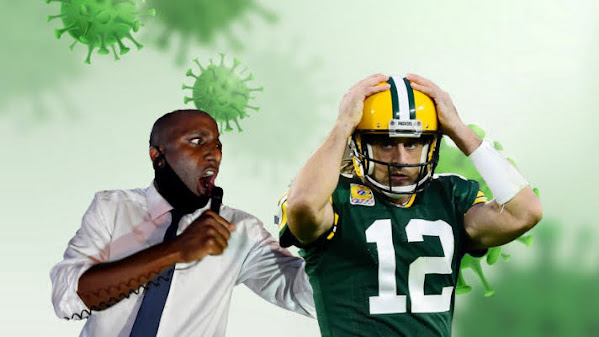 Gotta be honest here . . . I try not to listen to what ballers say about politics because I watch sports to relax and the insights are typically mundane talking points with no interesting story or relevant perspective.

However, Kansas City's top politico has entered the fray in a COVID vaxx slap fight ahead of an upcoming and disappointing match-up.

This sparked quite a bit of debate but it's clear Mayor Q has the best interests of KC at heart given that he's tap dancing quite a bit to make a disappointing game seem more interesting.

by: Nexstar Media Wire Posted: / Updated: GREEN BAY, Wis. - Packers QB Aaron Rodgers spoke for the first time Friday afternoon since testing positive for COVID-19, claiming that he took alternative treatments for COVID-19 because he was allergic to ingredients in the mRNA vaccines.

Play video content The Pat McAfee Show Aaron Rodgers says after contracting COVID this week ... he consulted with Joe Rogan and decided to take ivermectin to fight off the virus on the heels of the podcast host's advice. The Green Bay Packers star revealed his at-home, coronavirus-fighting plan on "The Pat McAfee Show" on Friday ...


Aaron Rodgers Can't Defend a Losing Argument. That Won't Stop Him From Trying.

On Friday, Packers quarterback Aaron Rodgers spoke on The Pat McAfee Show. His appearance came two days after he was placed on Green Bay's COVID-19 list and declared out for Week 9 because he tested positive and is unvaccinated, news that surprised anyone who had heard Rodgers say that he was "immunized" in August or who had observed him seemingly following the protocols assigned to vaccinated players, such as being allowed to hold an indoors press conference without a mask.

Shailene Woodley posted and seemingly deleted a cryptic message to social media after fiancé Aaron Rodgers revealed he has not been vaccinated for coronavirus. The Green Bay Packers quarterback has tested positive for COVID-19 and will miss this week's against the Kansas City Chiefs.

The NFL began its investigation into Aaron Rodgers and the Green Bay Packers on Thursday, a person with knowledge of the situation told USA TODAY Sports, to determine whether the quarterback and team had violated COVID-19 protocols. The person spoke on condition of anonymity because of the sensitivity of the situation.