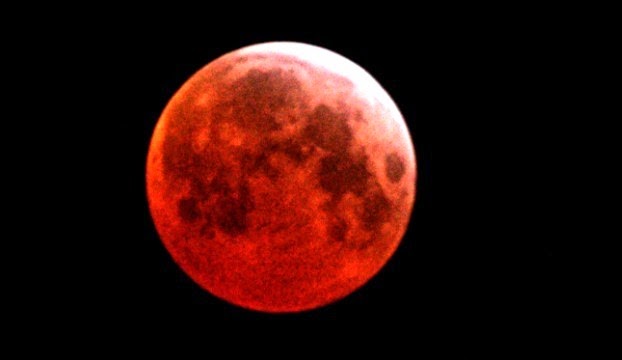 Tonight marks a historic celestial event that the Earth hasn't witnessed in about 600 years.

Some of our all-time favorite night owls might want to take a moment to look upward and watch. In Kansas City the lunar eclipse will be visible from 2am-4am.

While stargazers are waiting, feel free the check our news link collection and weigh in on pop culture, community news and top headlines . . . Check-it . . .

How Delta-8 THC is Shaking Up the KC Cannabis Industry

Delta-8 THC is at the center of the most recent craze in cannabinoids. Delta-8 has surged in popularity since the 2018 Farm Bill, which legalized hemp and products with less than 0.3% THC, the intoxicating component of cannabis plants that delivers the "high."

KANSAS CITY, Mo. - You'll see a once-in-a-lifetime cosmic phenomenon if you look to the skies Thursday night. A near-total lunar eclipse will take place and cause the moon to look blood red from the Earth's shadow. According to the National Weather Service, it will be the longest lunar eclipse in 580 years.

COLUMBIA, Mo. - Conservatives railed against JPMorgan Chase on Thursday after a subsidiary pulled out of a business deal related to a Missouri political fundraiser that was to feature Donald Trump Jr. Missouri political action committee Defense of Liberty was using online payment company WePay for ticketing for the Dec.

About half of abortions in Kansas are for Missouri residents. A constitutional amendment could change that.

Delivered every Tuesday and Thursday morning A donation to The Beacon goes beyond the newsroom. We amplify community voices, share resources and investigate systems, not just symptoms. The Beacon in your inbox. In-depth reporting delivered every Tuesday and Thursday morning. Patients who arrive at an abortion clinic in Overland Park, Kansas, have often traveled long distances.

After 43 years in a Missouri prison, Kevin Strickland's braided hair could be the key to his freedom

Since May, Jackson County Prosecutor Jean Peters Baker has said Kevin Strickland, who is African American, is innocent of the triple murder that put him behind bars in 1978. She laid out her arguments for his exoneration during Strickland's innocence hearing last week, and one of her points involved his braids.

KANSAS CITY, Kan. - Legislation introduced by U.S. Rep. Sharice Davids is intended to promote more women in the trucking industry. The bill by Davids, who represents Kansas' third congressional district, would require the establishment of a board that would focus on creating opportunities for women in trucking.


Round About News From Above

The Moon is about to fall into the Earth's shadow for the longest duration since the 15th Century, offering stargazers a unique opportunity to observe a lunar eclipse. The celestial spectacle coincides with the Full Moon, traditionally known as the Beaver Moon by Native American tribes, and will be visible across large parts of the globe, including North America and partially in the UK.

WASHINGTON, Nov 18 (Reuters) - The United States is considering a diplomatic boycott of the Beijing Olympics, President Joe Biden confirmed on Thursday, a move that would be aimed at protesting China's human rights record, including what Washington says is genocide against minority Muslims. "Something we're considering," Biden said when asked if a diplomatic boycott was under consideration as he sat down for a meeting with Canadian Prime Minister Justin Trudeau.

The lawyer for Jacob Chansley, who is known as the "QAnon Shaman," said on Wednesday that his message to former President Trump Donald Trump On The Money - Biden puts oil industry on notice The Memo: Gosar censured, but toxic culture grows Cleveland's MLB team officially changing name to Guardians on Friday MORE was to take care of "the jackasses that you f----- up because of January 6."

Worn out by what they see as entrenched dysfunction and lack of focus, key West Wing aides have largely thrown up their hands at Vice President Kamala Harris and her staff -- deciding there simply isn't time to deal with them right now, especially at a moment when President Joe Biden faces quickly multiplying legislative and political concerns.

Rep. Alexandria Ocasio-Cortez, D-N.Y., allegedly claimed that she voted for President Biden in order to make him a transformational president like Franklin Delano Roosevelt. "Just a few weeks ago, Congresswoman Abigail Spanberger said, 'Nobody elected Joe Biden to be FDR,'" House Minority Leader Kevin McCarthy, R-Calif., said in a blustering speech against Biden's Build Back Better legislation on Thursday.

Courtesy Is Often A Sticking Point

INDEPENDENCE, Mo. - The circus is in town this weekend! The Ararat Shrine Circus has taken over Cable Dahmer Arena in Independence with six chances to see the clowns, acrobats and more. The first show was Thursday night, but there are more shows on Friday, Saturday (three performances) and Sunday.

One week from tonight, Kansas City will kick off the holiday season with the Evergy Plaza Lighting Ceremony. There's a lot of work that goes on behind the scenes on the plaza to make it happen.The electrician behind that spectacular moment has a lot of weight on his shoulders.The plaza is known for its miles of lights lining the buildings and towers.

KANSAS CITY, MO (KCTV/AP) --- For the first time since the 2015 season, a Kansas City Royals player finished in the Top 10 in the MVP vote. Royals catcher Salvador Perez finished seventh in the voting, receiving one second-place vote.

The Bridge conducting a live show at Boulevardia. // Courtesy 90.9 The Bridge A little over 20 years ago at the University of Central Missouri, The Bridge hit the airwaves for the first time. The station made its way out of Warrensburg 12 years later, heading 60 miles down the road and setting up shop in Kansas City.

by: Brian Dulle Posted: / Updated: SPRING HILL, Kan. - Spring Hill, Kansas Mayor-Elect and Councilmember Tyler Graves has resigned. Graves submitted his resignation Thursday night as councilmember for the City of Spring Hill that went into effect at 7 p.m. He informed current Mayor Steven Ellis that he is relocating to Florida and will be moving next month.

It's been a couple of years since Brookdale Wornall Place has held its annual art sale, thanks to the pandemic. But this year a last minute decision was made to open it up to the public. "We decided yes we would allow people to come in this year," says Norma Mauer.


Dress Warm To Watch The Moon

If you're up around 3 a.m. Thursday evening you can catch a near-total lunar eclipse in Kansas City. The lunar eclipse will begin around midnight, but it won't really be notable until it's peak around 3:02 a.m.If you do plan on staying up to watch the moon, or lack thereof, temperatures will also be turning colder overnight.