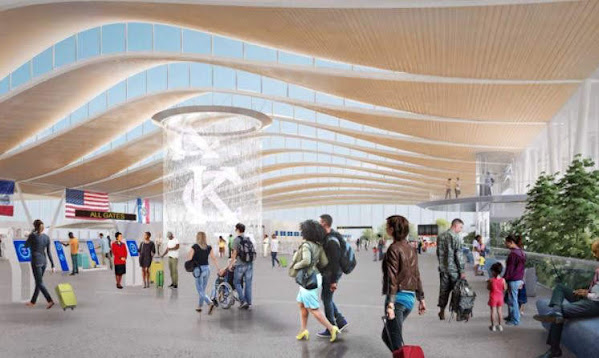 Local news is skipping this angle but it's important . . .

Southwest is the leader and one of the biggest investors in New KCI.

More than a few denizens of our blog community blame the airline for persuading voters with a bevy of sketchy promises for a smallish and ultimately disappointing new airport.

Southwest is mired in vaxx mandate confrontation and allegations from right wing pundits and keyboard warriors.

Tucker Carlson has claimed the cancellation of thousands of flights by Southwest Airlines was "a direct consequence" of the Biden administration's vaccination mandate for federal workers. Southwest is a private company, not subject to federal vaccine rules.

Southwest Airlines CEO Gary Kelly says he's against making his employees have the COVID-19 vaccine, but President Joe Biden has forced his hand with the federal mandate. "I've never been in favor of corporations imposing that kind of a mandate.

Casey Murray, president of the Southwest Airlines Pilots Association (SWAPA), joined CNBC's 'Squawk Box' on Tuesday to talk about the thousands of canceled Southwest flights that the company and union agree has nothing to do with a lawsuit objecting to the way the airline is implementing federal vaccine requirements and recommendations.

American air travel is taking off again for the upcoming holidays but passengers may need to deal with possible headaches like the recent cancelations at Southwest Airlines, experts say. "Don't be afraid to get out there but just be patient. That's the key," said Daniel Burnham, senior passenger operations specialist for Scott's Cheap Flights.