We've followed the career of Alissia Canady for quite some time and tonight we take a moment to celebrate her latest triumph.

She started out as a long shot candidate against Freedom, Inc. running a grassroots campaign with her friends against longtime Kansas City statesman Ken Bacchus and ultimately proving successful.

Of course there was a notable and somewhat embarrassing run-in with a KCPD officer wherein she asked for "consideration" for herself and her car that had expired tags.

She was an integral part of the "Save The Paseo" movement when her office helped petitioners and gave voice to many East side residents who opposed the controversial and ultimately doomed MLK name change based simply on the lack of transparency by city officials.

She ran for Mayor and earned a surprising level of support . . . In fact, insiders agree that had a few things gone her way . . . She would have been the first Black female Mayor of Kansas City.

Her ability to garner votes citywide made her endorsement of Mayor Lucas even more important and a key component of his victory.

Unfortunately, whilst Ms. Canady has great name recognition across the metro . . . Her campaign for guv lite didn't enjoy the same kind of success . . . Mostly because Missouri Democrats didn't put any significant effort into helping down ballot candidates.

Given that the past is prologue . . .

Tonight we take a moment to pay tribute to Ms. Canady and her latest achievement . . . What looks like a very happy wedding. 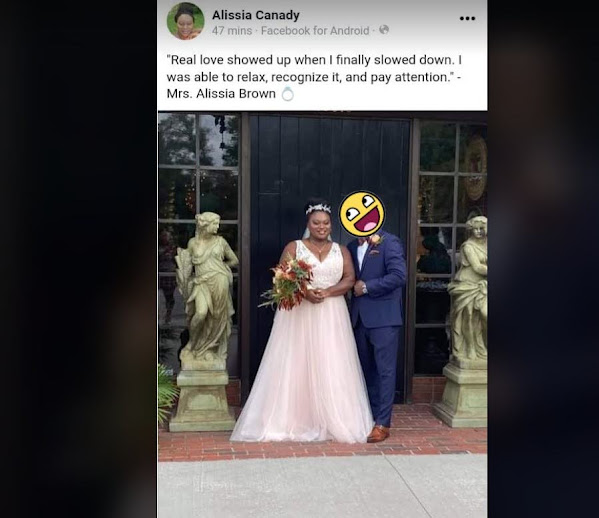 In fact, Mayor Q took a moment to offer his personal congratulations . . .

"My sincerest congratulations to one of Kansas City's most beautiful and kindest recent brides, former Councilwoman Alissia Canady, now Brown!

"Love has this way of finding us even when we least expect it and there is no one more deserving."

And maybe a very smart way of diffusing a potential challenge given that Mrs. Alissia Brown is probably more popular than the current KCMO administration.

We won't ruin the happy day with politics and the very likely possibility that she might run for Mayor again given that she has demonstrated throughout her career that she has no problem challenging the status quo.

Accordingly, as is our tradition here at TKC on Saturday night we share just a few tunes dedicated to the topic at hand: Love & Ambition.

First, a song about the dream of a bright future . . .

And then, a classic rock tune and a great video regarding political high hopes . . .

One of our old school faves about better days ahead . . .

A somewhat bittersweet new melody that is uplifting nevertheless . . .

A wedding classic that still resonates . . .

Congratulations to the bride & groom who hopefully won't waste time reading our politically charged prattle, jokes, benign insults and other observations intended to entertain and inform fellow plebs amid our miserable lives.