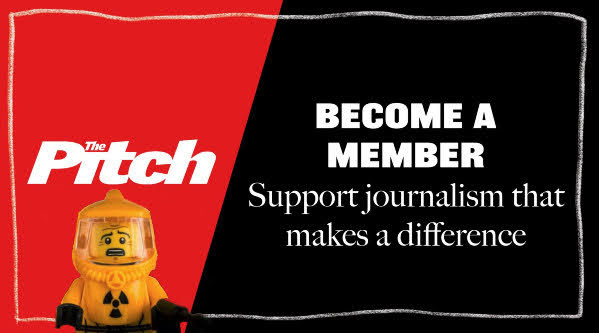 So, for journalists who didn't graduate from a decent school or have decided to slug it out on the Internets . . . The "career" mostly consists of begging people for money.

Full disclosure: This blog has begged for money at a few points in our tenure and we're not above doing it again . . . We're just waiting for the right moment . . . Maybe when those traveling "feature" strippers start coming back into town again.

I guess there's no shame in it given that politicos from BOTH sides of this aisle are also forced to scrounge for charity like some hobo who might even have to do a little dance in order to garner pocket change from the ruling class.

At some point most people are forced to sing for their supper.

The Pitch is now syndicating stories from prog blogs, picking up other content from national outlets and they don't really offer much in the way of local reporting any longer. There's really not a lot of local journalism for patrons to support.

To be fair, maybe their selling proposition has more to do with quality over quantity . . . Which is the same argument that so many suburban housewives use to justify their mostly dead bedrooms.

Remember the zaftig aging hipster who endlessly bragged about owning The Pitch?

Yeah, she doesn't do that anymore and doesn't really seem as interested in the publication that has clearly become a drain on her resources amid the pandemic.

The point here is that The Pitch is clearly struggling but they aren't having any fun doing it.

In fact . . . Other than putting a great deal of energy into writing about their journalism . . . They don't really seem to be doing very much . . . Journalism.

Among the vicious circle of Kansas City's intelligentsia (lulz) here's more than a bit of schadenfreude in watching colleagues suffer and that's why these posts about hard times for dead-tree media always seem to draw a crowd or macabre lookie-loos.

Check the latest ask from hipsters who, like so many others of their ilk, are hoping that their parents, friends, family and sympathetic souls can bail them out one more time . . .

"For our staff, deadline week is the best of times and the worst of times. Every month, when we send the PDF to our printer one to five minutes before the deadline, it feels like we’re making it by the skin of our teeth. It’s a common feeling for most small, independent news sources around the country.

That is precisely why we are, once again, asking you to consider becoming a member for as little as $5 per month."

What do we journalists even do?

Whew! We survived the making of yet another magazine, and it hit stands this morning! For our staff, deadline week is the best of times and the worst of times. Every month, when we send the PDF to our printer one to five minutes before the deadline, it feels like we're making it by the skin of our teeth.