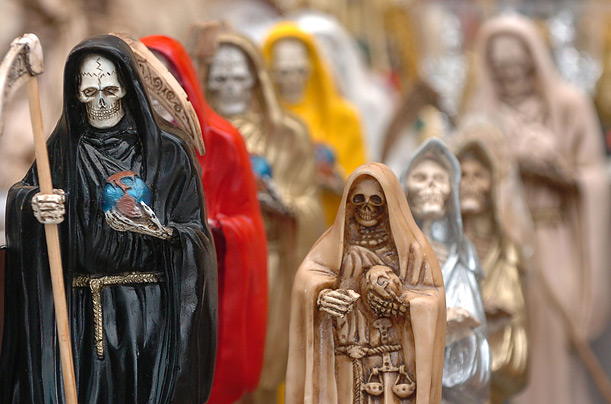 Most people don't care but Mexico is one of the world's deadliest countries and their homicide stats are fueled by an ongoing drug war that eclipses casual violence in the United States.

We note this fact not only because many of our hipster friends don't understand that "adopting" cultures also comes with a downside.

Of course, the politically correct approach to the holiday attempts to spin its "deeper meaning" and sanitize the death worship for popular American consumption.

As always, TKC is more than willing to share an inconvenient fact and note that not all Mexicans celebrate this holiday that's more controversial than the gringos understand . . .

Reality, Mexico has a significant evangelical population and they have rejected the death party . . . Here's a hot take from a Mexican theological expert. . .

"Given the holiday’s false spiritual claims, all the evangelicals I know in rural areas of Mexico—where this celebration is taken most seriously—strongly oppose participation. Some refuse to participate even under tremendous social pressure, since not celebrating the town festivals can mean social ostracism. In certain cases, those Christians may even be expelled from the pueblo (town).

"Now, for Christians outside of Mexico, participating in the Day of the Dead may seem like a choice with few obvious consequences. A single night of costumes and feasting—or not. But we should remember that, for our brothers and sisters in rural Mexican communities, the choice to abstain from this celebration is a matter of conscience with serious implications. We should not thoughtlessly adopt a pagan practice that costs them so much."

To be fair, the American celebration ignores the Catholic and Native tribal roots of the holiday and instead focuses on dumb-ass face painting, sugary treats and slumming with all of your Latino pals . . .

How Should Christians Think About the Day of the Dead?

In 2017 Pixar premiered , a movie centered around the Mexican tradition of the Day of the Dead (read Día de los Muertos- TGC's review). With the film's funny punchlines, likable main character, and emphasis on the value of family, Disney introduced an ancient celebration to millions around the world.