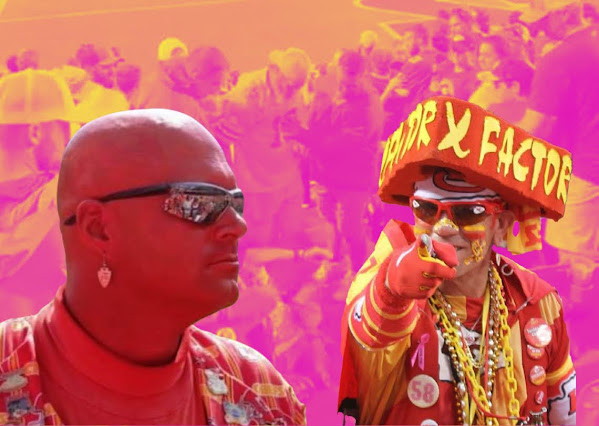 It shouldn't go unnoticed that two of the biggest nincompoops to ever darken the stands of Arrowhead have garnered international acclaim for a cringe-worthy battle of wits wherein all of Kansas City ultimately suffered disgrace in the aftermath of their violent brawl.

To be fair, barbaric clown fighting as a new dynasty quickly crumbles might serve as the perfect metaphor exemplifying American life in 2021.

And now Kansas City, and our gully blog readers in particular, are confronted with a choice . . .

SHOULD WE ADVOCATE FOR THESE D-BAGS TO BE BANNED FROM ARROWHEAD OR WELCOME AN INEVITABLE REMATCH?!?!

Sorry but we'd have to give the advantage to Mr. RedExtreme given the one-sided nature of the first match-up.

Mr. X-Factor clearly has something to prove and will be fighting for his dignity or at least to silence everyone yelling: "YOU GOT KNOCKED THE F*CK OUT!!!" in his general direction for the next 15-25 to years.

But all of this leads us to a bigger question . . .

Generally, are the fans of the Kansas City Chiefs at Arrowhead awful people?!?!

Of course the first thing to come to mind is the guy who was beaten to death for trying to get into the wrong car at Arrowhead.

Then again one of our favorite episodes includes a married couple caught canoodling in the parking lot proving that love still does exist at the Truman Sports Complex and, technically, the place is family friendly after all . . .

Of course it's unfair to make generalizations about an entire group of people based on the actions of just a few jerks . . .That's a lesson that's mostly lost in American history and so it remains an open question.

Given the consistent level of violence amongst fans we've seen this season, there's no further inquiry needed regarding the danger confronting Arrowhead patrons which seems to be worsening as the team's fortunes quickly fade.

KANSAS CITY, Mo. - For the second home game in a row, fighting in the stands of GEHA Field at Arrowhead Stadium is all over social media, this time with an odd twist. Two weeks ago, it was fans brawling as the Kansas City Chiefs took on the Los Angeles Chargers.

If you haven't seen this superfan fight at Arrowhead then you are missing out on a lot of drama that you would never know could exist in the world of superfans. X-Factor is a huge Chiefs fan who is ve...