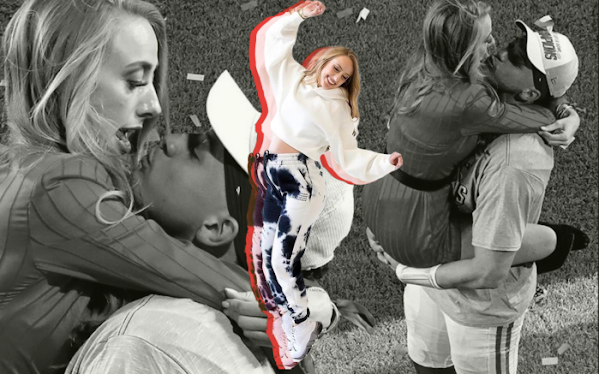 Sorry if this question comes off rude but inquiring TKC minds want to know . . .

We won't question the cow, milk or her cringe-y social media efforts to relive high school.

But this season is looking tougher than most fanbois expected and the king & queen of Kansas City don't seems as regal as their they did during Super Bowl glory days.

A loss today wouldn't just totally kill hype . . . But it may bring the "boo birds" back to Arrowhead before Winter.

A massive brawl in the stands last week already proved that the fan are revolting.

Another loss after an arrogant, brazen and foolhardy prediction of an undefeated season would simply add insult to injury.

Historically, dudes in the NFL use wives & girlfriends like Kleenex and confronting the worst losing streak he's ever endured in his professional career . . . Nobody would blame Mr. Mahomes for making a few important changes.

Before the game gets started we share this quick compilation of relevant links and a healthy bit of skepticism . . .

Chiefs coach Andy Reid went to the hospital via ambulance after last week's loss to the Chargers as an extreme precaution, but quickly felt better and had no setbacks this week. There are no concerns about any other health issues arising, league sources said, in what looks like an isolated issue due largely to dehydration.

Play video content TMZSports.com Travis Kelce says there IS concern in the Chiefs' locker room over their poor, 1-2 start ... but he tells TMZ Sports he believes that's actually a good thing. The star tight end revealed K.C. is upset after falling to both the Ravens and the Chargers in back to back games ...


AFC West Report: KC Chiefs in last place and the world is crumbling

Well, Chiefs Kingdom, I am officially on the brink of panic. One game was fine, but two sloppy games? That's too much. Too many turnovers, too many missed tackles, not enough push on the defensive line. There are a lot of issues, and it just makes me really nervous.


Chiefs vs. Eagles 2021: game time, TV schedule and how to watch live online

For Week 4 of the NFL season, the Kansas City Chiefs are on the road to take on the Philadelphia Eagles. Kickoff is scheduled for Noon (Arrowhead Time) on Sunday. The game will be broadcast on CBS - locally on KCTV/5. After three games, neither team is where it wants to be.