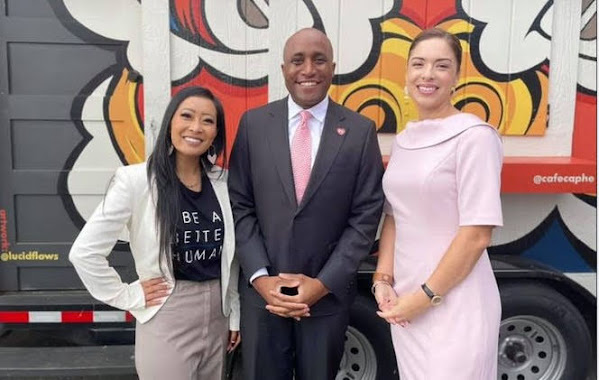 Diversity has its benefits . . .

Women from just about every major ethnic group on the planet have all yelled at TKC at one point or another . . . Many in their native tongue.

Still . . . Somebody plastering your ethnic background on a career milestone has a way of cheapening it.

Among a very small circle of locals, TKC is known for snark, spelling & grammar errors, more than a bit of street level journalism (lulz) and insider municipal guv gossip . . . Demographic background as a low-rent Chicano is about the LEAST interesting thing about this basement blogger.

Still, these ladies have achieved far more than temporarily ruling a tiny piece of the Internets from their mom's basement . . .

And so . . . We celebrate their glorious achievement by quoting Mayor Q . . .

I am so proud to introduce Jackie Nguyen and Alejandra Perez as my new appointees to the Kansas City Parks Board.

Jackie is a first generation Vietnamese American, the daughter of a refugee, and a Columbus Park resident. Before moving to Kansas City and opening her coffee shop, Cafe CaPhe, she spent a decade in New York City on Broadway.

As a Commissioner, I know Jackie will help elevate our Parks Department’s relationship with small businesses and entrepreneurs, and so many in our community that have for too long been overlooked.

Alex is the daughter of Mexican immigrants, a first-generation college graduate, and a Northland resident. Alex serves as the Scholarship Director at the Greater Kansas City Hispanic Development Fund.

As a Commissioner, Alex will help to engage all residents, especially students from the local high schools and colleges in throughout our community, to ensure they have the resources to enhance the lives of their families, and build a stronger Kansas City.

Both Jackie and Alex will work to ensure our Parks system—playgrounds and public spaces, community centers and programming, and so much more—is built for all.