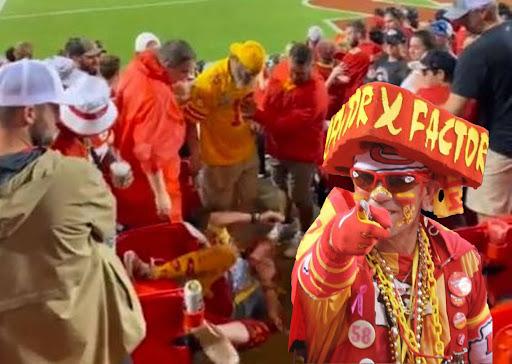 An Internets viral sensation fight has seemingly knocked some sense into a Kansas City Chiefs Superfan.

Here's the background and the latest . . .

Following the altercation, X-Factor made a memorable appearance on the local Fox affiliate in which he spoke of himself in the third person and expressed anger about being called a meth addict, as he was actually a cocaine addict and alcoholic. . . .

In announcing his retirement via Facebook post, X-Factor acknowledges that he was inebriated prior to the alleged fight with his former friend.

“I have let more people down than I can ever imagine. So many look to me as inspiration to get clean. I threw away over fifty months clean and sober because pride said ‘Ty, you can have one beer and escape your problems for once in over four years,'” he writes. “I started living life old Ty lived making terrible decisions. I drank and smoked a joint at Arrowhead which lead me to be in a fight.”

In one of our favorite articles of the day, read more via www.TonysKansasCity.com news link . . .

'I was becoming a monster:' Chiefs superfan X-Factor will retire

Chiefs superfan X-Factor, the nom de guerre of local man Ty Rowton, has just announced his retirement, saying that he was "becoming a monster."