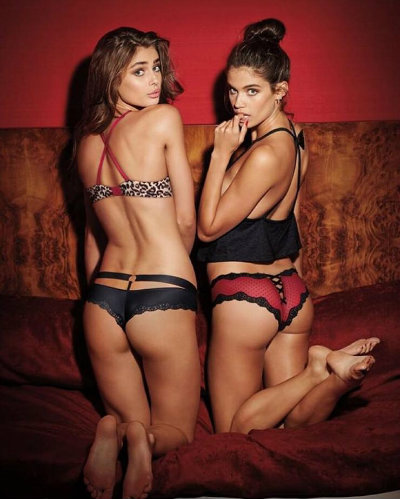 Tonight we share a peek at Victoria's Secret hotties despite a cultural shift which attempts to convince us that insanely hot models are no long desirable. Accordingly and defiantly, we check pop culture, community news and top headlines in order to try and sort it all out.

For residents living near the dumpsites, city action isn’t cutting it. Instead, they’re taking matters into their own hands, banding together to keep their neighborhoods and parks clean.

KANSAS CITY, Mo. - A recent inspection by the U.S. Department of Housing and Urban Development (HUD) found pest control issues at a federally subsidized senior apartment complex FOX4 has been telling you about. Last Monday, FOX4 told you Opportunities Pavilion Senior Center residents said they're living in unsafe conditions with drug use on the property and even prostitution.

KANSAS CITY, Mo. - City Fish and More, a restaurant and sea food located at 2704 State Avenue in Kansas City, Kansas, is closing its doors after 38 years. Owner Pete Badalucco cited a fire that happened at the business that happened on Aug. 1, as one of reasons he decided not reopen.

A new podcast about Victoria's Secret promises to lift the lid on the brand's troubling underbelly. "Fallen Angel" investigates the "very sinister ecosystem" of the lingerie giant and its disturbing connection to Jeffrey Epstein, who was the money guru of the company's founder, Les Wexner. "I think ...

subscribe to The NPR Politics Podcast podcast The House committee investigating the Jan. 6 attack on the U.S. Capitol on Tuesday evening approved a criminal contempt report against Steve Bannon, an ally of former President Donald Trump's, for defying a subpoena from the panel.

In the final weeks before Election Day, more than 300 Black churches across Virginia have agreed to play a video in which Vice President Kamala Harris urges churchgoers to vote for Virginia Democratic gubernatorial candidate Terry McAuliffe, a move that violates the law, some experts claim.


In Defense Of Family Time

White House Press Secretary Jen Psaki shut down a question from a Newsmax reporter about Transportation Secretary Pete Buttigieg's paternity leave. Emerald Robinson of Newsmax asked Ms Psaki that "given the severity of the supply chain crisis, the multiple issues that you outlined, wouldn't it be wise for the secretary to get back on the bicycle so to speak - come back to work?"


No Debate On Money Matters

Psaki slammed for offering no explanation for why Build Back Better will cost nothing: 'Because it won't'

White House press secretary Jen Psaki offered little in the way of explanation for the administration's debunked claim Build Back Better plan will cost " zero dollars," simply telling the press to take her word for it. President Biden's spending package is projected to cost $3.5 trillion.

A Brazilian congressional panel is set to recommend mass homicide charges against President Jair Bolsonaro over his handling of the coronavirus pandemic, according a leaked government report seen by CNN on Tuesday.


Brits Save The World?!?

So what's missing from the strategy? Well, there's no reference to eating less meat - which the government's advisers say is needed. And the aviation strategy - putting no constraint on flying - runs counter to advisers' opinions.

This has gotta sting!! Alex Rodriguez was just trying to talk some baseball during American League Championship Series coverage on Monday ... when Boston fans used it as an opportunity to ruthlessly troll the hell out of him about Jennifer Lopez and Ben Affleck .

The Weeknd cancels 'After Hours' tour, including Kansas City show, as he plans bigger stadium tour

KANSAS CITY, Mo. - The Weeknd has canceled his "After Hours" Tour this winter, including a stop in Kansas City, and is instead planning a bigger tour for this summer. The Weeknd was set to perform at Kansas City's T-Mobile Center on Feb.

Is downtown Kansas City baseball worth it? Good luck finding out the real price tag

Somehow, though, when the chat turns to plans for building new sports stadiums, or rebuilding old ones, numbers turn to mush. Kansas City has talked about downtown baseball for at least 30 years. There are pictures and diagrams and wouldn't-it-be-nice studies on every shelf.

FAIRWAY, KS (KCTV) -- Missouri education leaders say the need for substitute teachers has hit a critical level. Tuesday morning, the State Board of Education approved a permanent change in requirements hoping to attract more substitutes. "I know counselors are being pulled," said Paul Katnik, Assistant Commissioner for the Missouri Office of Educator Equality.

Creature Feature: Barton and Yoda are the playful and affectionate pets you've been looking for

Barton is the perfect energetic and playful pup. // Courtesy KCPP We teamed up with KC Pet Project to host a weekly "creature feature" on loveable and adoptable pets here in the KC Metro. This week, KCPP is featuring Barton, a 2-year-old mixed breed dog, and Yoda, a 5-year-old domestic shorthair.

Hide Transcript Show Transcript GOOD JOB RUBY GOOD GIRL. YEAH, BEAUTIFULAY D OUTSIDE. IT REALLY IS A GREAT DAY TO GET OUTSIDE. MAYBE TAKE THE DOG FOR A WALK OR GO FOR A BIKE RIDE TS TIMEHI OF YEAR, YOU KNOW NORMAL HEIGHT SHOULD BE IN THE MID 60S.