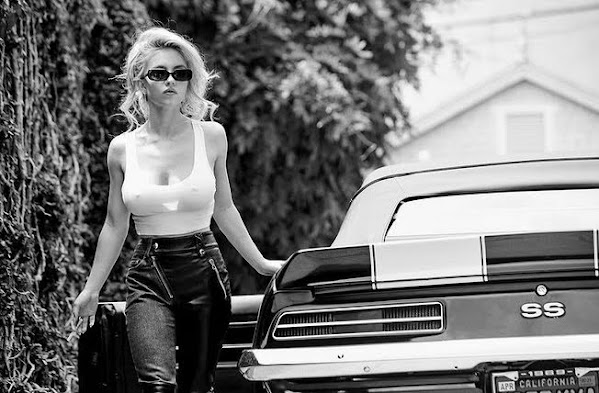 Right now we pay tribute to hottie Sydney and her fashion sneak peek along with pop culture, community news and top headlines.

Hundreds of apartment complexes - those with less than 20 units - have disappeared from the Kansas City market as landlords decide it's cheaper to demolish than fix them up. But losing these buildings is a huge blow to the city's affordable housing stock.

by: Juan Cisneros Posted: / Updated: OVERLAND PARK, Mo. - A fire at a home in Overland Park left one man dead Thursday afternoon. The Overland Park Fire Department was called to the 11500 block of Nieman Road on reports of heavy smoke coming from a two-story home.

KANSAS CITY, Kan. - Bethan Piggot started her job as COVID-19 intensive care unit nurse because she wanted to help heal and save lives. But ever since she's started her career, she feels like the grim reaper. Recently, KSHB 41 News Anchor Kevin Holmes talked with Piggot, who says she's still committed to helping in the fight against COVID-19.

Hoping to turn the Rock Island Bridge, located in Kansas City, Kansas, into a destination, the project's developer and architects hosted a Thursday information session for potential investors. Architecture firm Gould Evans said it expects to complete construction drawings by the end of the year, and developer Flying Truss LLC said construction firms are being interviewed.

ODESSA, Mo. - A new scam on social media is stirring up trouble across the Kansas City metro. It could jeopardize your social security number and other personal information if you're not careful. Troy Thieman from Odessa is warning others after he said someone tried to steal his identity.

Gilbert Carrasquillo. Getty Images. First off, I want it known I did not wake up feeling like a masochist wanting to get stabbed. I simply read Dante's blog begging the question of whether you'd allow an IG model to stab you in order to date her.

The House passed a resolution Thursday finding Trump adviser Steve Bannon in contempt of Congress and asking the Justice Department for criminal prosecution over his refusal to cooperate with an investigation into the Jan. 6 attack on the Capitol. The resolution passed largely along party lines in a 229-202 vote.

Many Democrats, who have lofty ambitions for the provision, immediately pushed back against the White House proposal. "Big mistake," said House Appropriations Chair Rosa DeLauro (D-Conn.). "Not good for the country." It would be a surprising casualty of Democrats' push to slim down their next big legislative package - one that would put much of their initiative at risk.

What we know so far about Trump's planned social media platform

subscribe to The NPR Politics Podcast podcast Banished from major social media platforms,former President Donald Trump has announced plans to form a public company that will then launcha long-anticipated social platform of his own, claiming to create a space to "stand up to the tyranny of Big Tech."

has repeatedly told a heartfelt story about his interactions with an Amtrak employee, even though the details of the story don't seem to add up. Biden on Wednesday told the factually challenged Amtrak story for the fourth time in his presidency to date.

Moscow will impose a 10-day lockdown from next week in an effort to curb soaring Covid-19 cases, the city's mayor has said, as Russia endures its worst-ever phase of the pandemic.

The FBI said "we don't have all the answers yet."

Dizzy Gillespie: a founding father of the 'bebop' revolution | JAZZ.FM91

This biographical article is part of JAZZ.FM91's supplementary research component to expand on The Journey to Jazz and Human Rights documentary podcast series. Click here to find out more. John Birks "Dizzy" Gillespie was born on October 21, 1917, in Cheraw, South Carolina.

I Spoke With Sex Workers Along Highways. Here's What I Learned.

From the use of torchlights to signal their presence at night to encountering a community of sex workers pimped by their own family, a filmmaker made some startling discoveries.

10-digit dialing begins Sunday for some in Kansas and Missouri

PNUNS AND HAS A RETREAT CENTER FOR CATHOLIC PRIESTS. KRIS: PEOPLE ACROSS THE COUNTRY WILL BE REQUIRED TO USE THEIR AREA CODE WHEN DIALING LOCAL NUMBERS. THAT CHANGE WILL AFFECT MANY PEOPLE IN KANSAS AND MISSOURI INCLUDING THOSE IN THE 816 AREA CODE.


Hold The Onions & Then Trash'em

(Meredith) -- The Centers for Disease Control and Prevention has identified red, white and yellow onions imported from Mexico as the source of a salmonella outbreak in 37 states, including Kansas and Missouri. The onions were imported from Chihuahua, Mexico and distributed by ProSource Inc.

Hide Transcript Show Transcript SHERIFF'S DEPUTIES HAVE NOT MADE ANY ARRESTS. THERE'S NEW HELP FOR VETERANS AND THEIR FAMILIES IN KAASNS CITY. TONIGHT PEOPLE GOT A LOOK INSIDE THE NEW FISHER HOUSE PROVIDING PLACES FOR FAMILIES TO STAY AS LOVED ONES GET MEDIC CALARE AT A V.A. MEDICAL CENTER.

A chilly afternoon will quickly transition into a chilly evening followed by areas of frost developing overnight across northwest Missouri. It's the first frost advisory in our area this season which impacts areas north of St. Joseph, MO.

Apropos for #TBT and because it's Dizzy's 104th B-Day - Dizzy Gillespie - Salt Peanuts is the song of the day and this is the OPEN THREAD for right now.