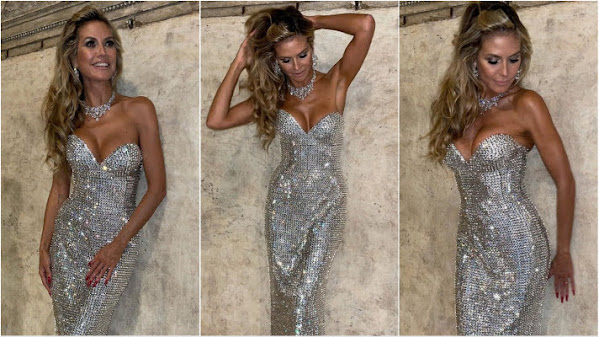 Longtime readers know that hottie Heidi has been an "interest" of this blog for quite some time. Admiring chesty German broads is a guilty pleasure of TKC and, apropos for #TBT, we're happy to see that at 48 she's holding up nicely.

Accordingly, our tribute to this International fashion celeb inspires a quick peek at community news, top headlines and pop culture.

We love a good redemption arc. For local cinephiles, there is no story more in need of a positive twist ending than the saga of Alamo Drafthouse Mainstreet. While the 1400 Main Street historic location has served as a film venue under many different monikers over the years, the Drafthouse ownership came to an end earlier this year.

Kansas City fared better with COVID-19 deaths than its Midwestern peers. Here's why

In nature, there are different types of symbiotic relationships. The finest, though, is that of mutualism: where both species benefit from their interaction with the other. Bees and flowers are nature's classic example, but the pandemic also illustrates the importance of similarly interdependent relationships within our civic landscape - none more than between public health and business.

'It's not a suicide': Family of missing Kansas City woman found in river calls death suspicious

KANSAS CITY, Mo. - Twenty-three-old Estella Dekaye had been missing for four days when kayakers found her body in the Missouri River. Kansas City police tell FOX4 her death is being investigated as an apparent suicide. They don't believe foul play was involved, but did not provide further details, citing the ongoing investigation.

KANSAS CITY, MO (KCTV) -- While working to earn a living, thieves ripped off a man by taking the tools he needs and the car he depends on. His vehicle is one of thousands taken in Kansas City every year. Last year, 4,430 vehicles were reported stolen in KC.

Heidi Klum canceled her yearly Halloween party for the second year in a row because of COVID-19. The supermodel, 48, said she does not feel it is right to throw a party while the virus is still going around.

Hannity calls on Mitch McConnell to 'stop being a swamp creature'

Sean Hannity warned Senate Minority Leader Mitch McConnell against offering any help to "radical" leftist Democrats who are trying to spend as much as $5 trillion on what they call "human infrastructure" Wednesday on "Hannity." Hannity noted Democratic Sens.


Texas Fights Over Rights Vs. Life

Good morning. Texas's near-total abortion ban has been temporarily blocked after a US federal judge ruled that it violated the constitutional right to abortion, in the first legal challenge to Senate Bill 8. Brought by the Biden administration, the lawsuit will prevent Texas from enforcing SB8 while litigation over its legality continues.

Senate Democrats emerged from a closed door special caucus meeting on the debt ceiling on Wednesday and said they intend to take GOP Minority Leader Mitch McConnell up on his short-term debt ceiling increase.

In Episode 5 of Impeachment: American Crime Story, the legal net of special prosecutor Ken Starr's investigation is beginning to close around Monica Lewinsky and Linda Tripp, as what was once a personal shared secret starts to become public property and the two women find themselves buffeted by powerful interests who are trying to discredit them or amplify them.

Faced with losing their jobs, even the most hesitant are getting vaccinated

In the quest to get more Americans vaccinated, one thing is becoming increasingly clear: Vaccine mandates work. Nowhere is that more apparent than at United Airlines. On Aug. 6, United became the first U.S. airline to tell its workers to get vaccinated against COVID-19 if they wanted to keep their jobs.

The trial of a 100-year-old former SS guard starts Thursday in the German town of Brandenburg an der Havel.

Dave Chappelle released a new comedy special, The Closer, on Netflix last night. Which means, with a depressing inevitability, that Chappelle also released a new set of jokes predicated on making fun of trans people, depicting them as thin-skinned bullies bound and determined to push poor, multi-millionaire comedians like Dave Chappelle around.

Andrew Lloyd Webber thought the Cats movie adaptation was "off-the-scale all wrong," he told Variety in a profile published Wednesday. "There wasn't really any understanding of why the music ticked at all. I saw it and I just thought, 'Oh, God, no,'" he said.

Tell Pitbull where to eat while he's in Kansas City

KANSAS CITY, Mo. - PItbull has a very important question to ask his Kansas City fan base. Mr. Worldwide tweeted his followers and asked where he should eat while visiting the City of Fountains. There were a lot of early recommendations for Joe's KC and Q39.


Make A Date With Local History

Federal funding of nearly $1.3 million dollars will go toward a new 4,400 square foot building for the Mattie Rhodes Art Center and Gallery. The building has more than a cutting edge look - it's a place to protect and preserve culture.

The chiefs face a tough team Sunday night. The Buffalo Bills come to Arrowhead for a prime-time matchup. This is a re-match of the AFC championship game last year. The chiefs prevailed handily.In that game, the Chiefs overcame an early deficit to take home a commanding win.This year, the Bills are a team you can't make many mistakes with.

A dense fog advisory is in effect for nearly our entire viewing area until 9:00 A.M. Low clouds and some fog possible during your morning drive, especially closer toward Central Missouri. Expect peaks of sunshine throughout the afternoon as temperatures top out in the low to mid 70s.

#1 in this week of October 1991 - Marky Mark & the Funky Bunch "Good Vibrations" is #TBT the song of the day and this is the OPEN THREAD for right now.