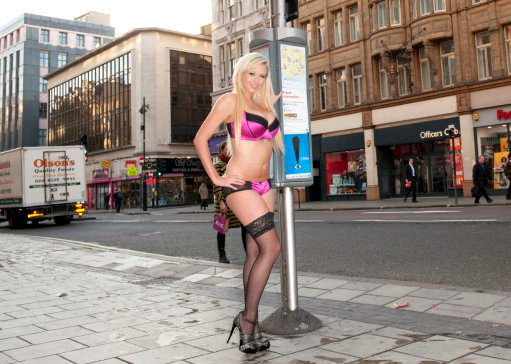 Right now we share an old school photo of hottie Sophie who is still very much in top form as we check pop culture, community news and top headlines for today . . .

Kansas City Fights For Books From Their Phone!!!

A display for Banned Books Week has caused a social media controversy for Mid-Continent Public Library. In bright red lettering surrounded by paper flames and yellow caution tape, the display reads, "Caution: These books are dangerous!"

KANSAS CITY, Kan. - Waste Management is making changes to adapt to supply chain issues caused by the pandemic. As part of those changes, the company moved to conduct recycling collection every other week. It's a change that public sector manager John Blessing said will ease trucking demands on the streets.

Sophie Reade put on an eye-popping display on her Instagram page, as she flashed the flesh to her 130,000 Instagram followers. The Big Brother champion looked sensational, as she decided to abandon her top for the occasion. Sophie, 31, rocked just a blush-pink thong for the impromptu photo session, as she posed with booty to camera.

The House speaker, Nancy Pelosi, has set a new deadline for the House to pass a major infrastructure spending bill after a week of negotiations left Joe Biden's social and environmental policy overhaul plan in a limbo.

China sends more aircraft toward Taiwan, one day after largest ever incursion

The Chinese air force has sent more aircraft into Taiwan's air defense zone, Taiwan's military said on Saturday, one day after the largest incursion ever into the zone. China sent 20 aircraft, followed by a second wave hours later, toward Taiwan.

Trump: 'I got the Pfizer'

Donald J. Trump joined Yahoo Finance for a wide-ranging conversation covering topics such as the U.S. economy, COVID-19 vaccines, cryptocurrencies, and his thinking on a third run for the presidency in 2024. The full interview will be released on Monday. Former President Donald Trump has revealed which COVID-19 vaccine he received before leaving the White House.

President Biden begged vaccine-reluctant Americans to roll up their sleeves for COVID shots Saturday as he marked what he called a "painful milestone": the 700,000th death associated with the coronavirus pandemic. "We must not become numb to the sorrow," Biden said in a statement issued by the White House.

The daughters of music legends Mick Jagger and Michael Jackson linked up this week for Paris Fashion Week in the City of Lights, as Georgia May Jagger and Paris Jackson dressed to the nines for Vivienne Westwood's Womenswear Spring/Summer 2022 show Friday.

A Halloween pop-up bar modeled on a Victorian parlor is coming to the Westport neighborhood this Halloween.

KANSAS CITY, Mo. - It is said that ghosts roam the halls and haunt the rooms of the historic Alexander Majors house. Alexander Majors was one of the founders of the Pony Express, and his home was built in 1856. Majors was married twice and had 13 children, 11 of which survived to adulthood.

Hide Transcript Show Transcript IS 68 DEGREES SOUTHEAST WINDS AT SEVEN. IT IS GOING TO BE PRETTY MDIL THROUGH THEAY D TODAY.