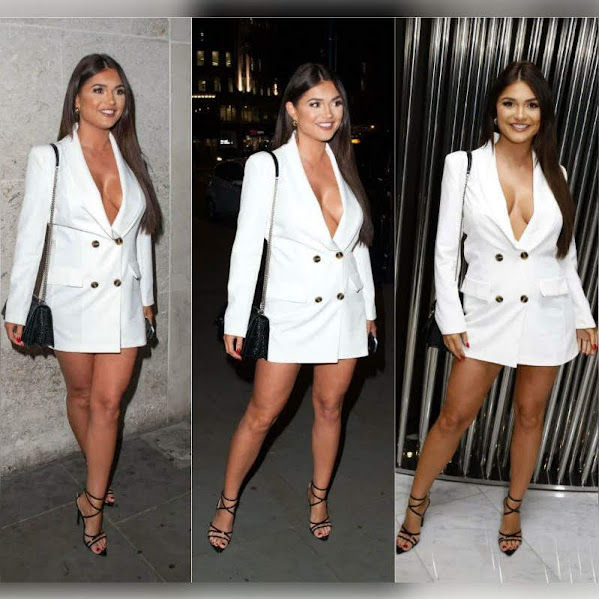 It's Monday and I don't like you anymore than you like me . . . In fact, this might be longest running Kansas City gathering wherein most of the inhabitants actually loathe one another. Second only to just about every country club and group of female friends.

Right now we take a quick moment to pay tribute to hottie India and her fashion success along with pop culture, community news and top headlines.

KANSAS CITY, MO (KCTV) -- There are over a thousand seasonal job listings on indeed.com for Kansas City, at a time when many businesses are struggling with regular staffing. A lot of the openings are for big names like UPS, Amazon, Fedex and big box stores like Target and Walmart, but some smaller local establishments are seasonally hiring too.

Mask mandates are faring well, but President Joe Biden's request that sports venues require fans to be vaccinated against Covid-19 has been shut out by Kansas City-area pro teams. Biden pleaded with the sports and entertainment industry on Sept.

KANSAS CITY, Mo. - Several families notified the Park Hill School District about a possible threat on social media. The Platte County Sheriff's office was called about 6:30 p.m. Sunday evening about threats of a school shooting at Lakeview Middle School. Investigators are talking with the students that are involved and working with the school [...]

LOVE Island's India Reynolds sizzled in black as she launches her new lingerie collection. The 'Anniversary' Collection with the luxurious British lingerie and swimwear retailer, Pour Moi, celebrates one year since her first collaboration with the brand. India, 30, previously revealed that she no longer speaks to ex-boyfriend Ovie Soko after their split.

Facebook was on the offense this weekend as the clock ticked down to a company whistleblower coming forward with revelations about the social network. The whistleblower is due to reveal their identity on news programme 60 Minutes on Sunday.

Biden heading to Michigan to promote agenda amid Democratic infighting

The Supreme Court is slated to decide on cases related to several hot-button issues during the term that begins Monday, including abortion, gun rights, and school vouchers. On Dec. 1, justices will hear arguments in Dobbs v.

Emily Ratajkowski accuses Robin Thicke of groping her breasts on 'Blurred Lines' set: 'I was nothing more than the hired mannequin'

Yvonne Sewall has reached a crossroads. The foundation that continues the legacy of the famed Max's Kansas City nightclub and restaurant is based in a Kingston home owned by Sewall, ex-wife of Mickey Ruskin, who breathed life into the New York City hangout of the 1960s and '70s for musicians, poets, artists and politicians.


The Cup Is A Bad Hombre

They came back home, and the timing fell into place. The café occupies a space that used to be a terminal for a bus line that took passengers from Kansas City to Mexico and back again. Once the pandemic hit and the U.S.-Mexico border closed, the business owners vacated the building, creating an opportunity for Reyes and her family to seize her lifelong dream.

The fried chicken platter. // Photo by Pilsen Photo Co-op The proverb "good things come to those who wait" is especially true for Chewology owner Katie Liu-Sung, who is poised to open her new gyoza bar this Friday, October 8. Ever since she announced she was taking over Westport's former Bluestem location, culinary buzz has been steadily building.


Monday Cool Down Ahead

Clouds continue to clear out of our area through the rest of tonight as temperatures cool rather quickly. Monday starts out quite crisp as temperatures bottom out in the upper 40s and low 50s by daybreak. By the afternoon look for highs to top out in the mid to upper 70s.

Lil Wayne, Rich The Kid - Feelin' Like Tunechi is the song of the day and this is the OPEN THREAD for right now.