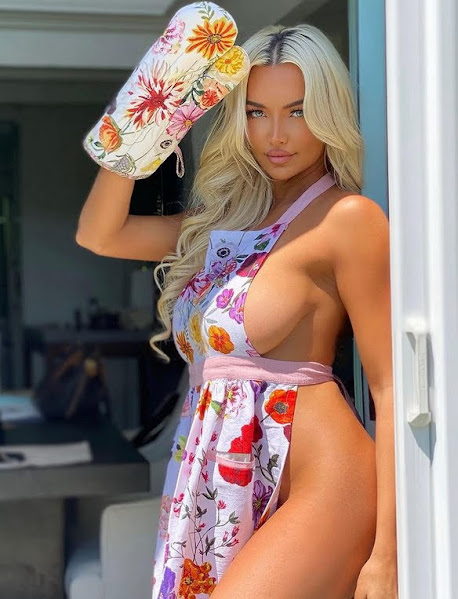 We start our nooner blast with a bit of educational and entrepreneurial feminist inspiration from hottie Lindsey as she hypes her latest photo set with this tag:

"They say a woman's place is in the kitchen...So I bought the whole house to make a point."

Accordingly, this inspires our peek at pop culture, community news and top headlines.

KANSAS CITY, Mo. - We are all used to ordering our favorite items from Amazon, but on Employee Appreciation Day, the company is flipping the script. The warehouse in Lenexa, Kansas put in a massive order for 243 large pizzas overnight to serve to nearly 1,000 meals.

The Cassidy Rainwater mystery now involves homemade bombs. A new report released by the Springfield Fire Department reveals two devices with tripwires were found at the property of suspect James Phelps. The report states that the devices were made out of mortar tubes as well as balloons and coiled fuses.

KANSAS CITY, Mo. - It has been six years since Kansas City, Missouri, firefighters Larry Leggio and John Mesh died battling a blaze intentionally set inside a nail salon in the 2600 block of Independence Avenue. Leggio, a 17-year KCFD veteran, and Mesh, a 13-year veteran with the department, were killed when the side of the building collapsed on Oct.

New owners seek to revive Missouri newspapers sold by Gannett: 'You have got to have local news'

When media giant Gannett wanted to sell the Lake Sun-Leader, a community newspaper with a 120-year history, Trevor Vernon decided it would fit in well with his family's other publications. Vernon Communications owns the Eldon Advertiser, the Hermitage Index and the Tipton Times. "It makes sense," Vernon said.

For November election in Kansas, today is the last day to register to vote

It will surprise no one that the last year has shaken the housing market. But, at least in Kansas City, the market may have done exactly the opposite of what you would expect.


Prez Biden Legacy On The Run

An Afghan interpreter who helped rescue Joe Biden after his helicopter made an emergency landing during a snowstorm in 2008, when he was a senator, has escaped Afghanistan with his family.

WASHINGTON - The House committee investigating the Jan. 6 riot at the U.S. Capitol is exploring ways to enforce its subpoenas after former President Donald Trump asserted executive privilege, an attempt to keep documents from his time in office from being turned over. But under current law, lawmakers have few options.

Democratic Rep. Adam Schiff on Tuesday referred to House Minority Leader Kevin McCarthy as an "insurrectionist in a suit and tie," as he slammed the House Republican leader for having "absolutely no reverence for the truth."

Grassley, 88, has worked carefully over his four decades in the Senate to cultivate a reputation as a politician completely in step with Iowans who cherish family values, hard work, ethical behavior and integrity. A few months ago, Grassley criticized Trump for refusing to accept the results of the 2020 election, accusing him of "poor leadership" and "extreme, aggressive and irresponsible" language.

"They are just booming," said Mark Booth, a former top revenue forecaster at the agency. "It is very unusual." Though Democrats are hammering the rich for not paying their fair share in taxes, the increase is being driven by levies primarily paid by the well-to-do. For example, corporate tax receipts leapt 75 percent, CBO says.

Our underwater future: What sea level rise will look like around the globe

House Speaker Nancy Pelosi nearly crossed paths with thousands of people protesting vaccine mandates in Italy this weekend. Pelosi, who was in Rome for a meeting with foreign leaders, was attending Mass in the city at St. Patrick's Church.

The creator of "Squid Game," the immensely popular international hit for Netflix, revealed how the financial crisis over the past decade as well as the election of Donald Trump inspired him to make the show. "Squid Game" follows 456 people who are all in dire financial situations.

Shawn Johnson is speaking out about a bad experience that she had during a routine security check at the airport when a Transportation Security Administration agent allegedly stopped the former gymnast for having breast milk with her.


No Jokes About Juice?!?

Kim Kardashian hosted Saturday Night Live and roasted her sex tape, OJ Simpson, her sisters, her mom's boyfriend, Caitlyn Jenner and Kanye West Kim's father Robert Kardashian famously got his friend and client Simpson acquitted of Nicole Brown's murder in 1994, after she was stabbed to death The reality star

Corinthian Hall: Back to Her Former Glory - In Kansas City

The Kansas City Museum has had some work done. Oh, you know, they all do, at a certain age. But this is more than a facelift-this is $22 million worth of work by JE Dunn and International Architects Atelier. After years of restoration and renovation, Corinthian Hall, the centerpiece of the Kansas City Museum, will...

On this week's episode of the Northeast Newscast, Publisher Michael Bushnell sits down with Kansas City Mayor Quinton Lucas to discuss the Kansas City Museum, which is set to reopen to the public following an extensive multi-million dollar renovation on October 21.

LINWOOD, KS (KCTV) --An Overland Park man is walking across Kansas to draw attention to a Kansas City, Kansas-based nonprofit organization, Unbound, dedicated to helping people living in poverty around the world. We caught up with Jake Hentzen near Linwood, Kansas, About 418 miles into his journey-with about another 30 to go.

by: Juan Cisneros Posted: / Updated: OLATHE, Kan. - The Olathe Animal Care and Control department received a call from a local resident on August 31 saying she saw a strange critter near Water Works Park. After investigating, it was determined that it was an endangered species of tortoise, not native to Kansas.

Gracie Abrams - Feels Like is the song of the day and this is the OPEN THREAD for right now.