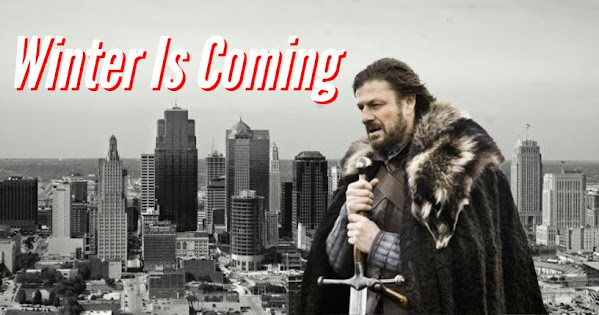 So the forecast for Winter is already uncertain.

Already we're seeing a push for city hall to house the "house-less" and once again find shelter for people with substance abuse and mental health issues who don't qualify for other shelters and agencies.

To be fair, while there is some support for this effort . . . It's implementation has angered urban core residents who have been unfairly burdened by the crisis.

Unhoused residents are still waiting for Kansas City's winter plan: 'We're in a race for our lives'

The backdrop to the houseless camp at 10th and Harrison streets is Kansas City's downtown skyline. Standing there, one sees two starkly different worlds. One is a bustling downtown chock full of luxury apartment buildings and businesses. The other is a growing group of tents pitched on a grassy area across the street from City Union Mission and ReStart.

KANSAS CITY, Mo. - Waldo-based Sierra Winter Jewelry and the Kansas City chapter of I Support the Girls are hosting a week-long donation drive that ends on Saturday. They are asking for donations of new or gently used bras, women's hygiene products and new underwear to be given to women and girls in need in the greater Kansas City region.


NOAA releases winter outlook: What does it mean for Kansas City?

KANSAS CITY, MO. (KCTV/AP) - Expect a drier, warmer winter down south and a wetter winter up north, U.S. government forecasters said Thursday. The National Weather Service predicted two-thirds of the U.S. will see above average temperatures from December through February, while the Pacific Northwest and southern Alaska will likely get colder than usual.


'We don't want people to die': Homeless advocates talk about plans ahead of winter

KANSAS CITY, Mo. - Addressing the needs of homeless people in Kansas City comes down to one thing: "We dont want people to die," Josh Henges, an advocate for the homeless, said. Last year exposed glaring needs for those experiencing homelessness after people did die out in the cold.

Crime, Safety cited for fourth camp clean up this year

Based on a sharp increase in neighbor complaints, Travis Silvers, one of the city's Illegal Dumping Investigators responded to the 500 block of Lawndale this morning with Independence Avenue C I D Avenue Angels (Titan Security) for the second time this month to clean out an occupied illegal dump site and houseless encampment.

KANSAS CITY, MO (KCTV) -- The Missouri Department of Transportation says it is facing a snow plow crew shortage. With winter just about two months away, MoDOT's director says the state is "several hundred" employees short of what it needs to cover more than one shift in a statewide storm.