In Defense Of The Kansas City Houseless Union 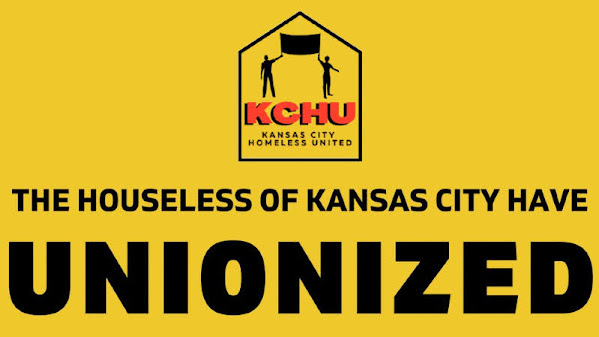 As always, we love sharing alternative perspectives on this blog and tonight we present an alternative take on the homeless crisis from a loyal reader on the left side of the political spectrum . . .

There seem to be two homeless crisis that Kansas City is grappling with. Both relating to Climate Catastrophe globally and locally.

It appears there's a large NGO bureaucracy built up to manage situations for tornadoes and floods but the homeless crisis is local from our perspective.

How Cerner decides to spend 2 percent of their profits is their business but locally the issue is with food, sanitation, shelter and health care for the homeless community.

They have elected leaders, hold meetings, work on completing projects and go through their day to day lives with the hopes that they won't be homeless forever.

I think it's important to realize several things are taking place in the homeless community that have been quite constructive. Kansas City Homeless Union is something that has not occurred since the 1930's during The Great Depression.There's no difference between "recession" or a "depression", it's just "recession sounds less severe"?

There was never a full recovery from the "Recession Of 2008".  Historians on the left compare WW1, The Great Depression and WW2 as one event like the "Thirty Years War" that brought Europe out of the "Feudal Ages".   It appears politically the US wants to go back to the Feudal Ages or some type of Neo-Liberalism where as Margret Thatcher said, "there is no society, there's only the mass"?

What we're hearing is "there is no homeless community recognized by City Hall"? This is convenient to the half dozen NGO's located in Kansas City that do disaster relief around the world. Salvation Army does a thrift store, halfway houses and a birthing center for adoption of children of unwed mothers. This seems like a public service but it's really "Capitalism Run Amok".  There's only 10 counties in Missouri that are showing any significant growth, so if a county is dying people then the survivors are either coming here to work, go to school or re-entry from prison.

Kansas City is not an extended vacation destination and it's likely the rich folks won't be spending more than two weeks a year anytime soon (until the sea levels reach Nebraska).

How we approach the support of the homeless community is to do away with the mythology we've seen from the film industry, media, mass incarceration and "The War On Drugs". The Homeless Community should be allowed to self organize for the benefit and safety of the public.