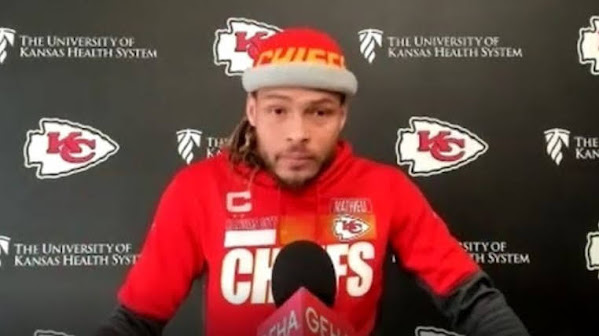 Here's the consensus from our blog community and so many other social media denizens . . .

The baller likely cost himself a FAT contract extension with his social media comments and seriously diminished his support among diehard fans.

Whilst sports pundits and newsies are quick to forgive on behalf of the public we don't notice a lot of fans convinced by the uninspired retraction.

The Kansas City Chiefs have been having an ugly season on the field and things are now getting ugly off the field, as key defensive leaders for the team have started feuding with fans on social media.

3:16 PM ET Adam TeicherESPN Staff Writer Close Covered Chiefs for 20 seasons for Kansas City Star Joined ESPN in 2013 KANSAS CITY, Mo. -- Tyrann Mathieu apologized for his recent comments on social media that were critical of some Kansas City Chiefs fans, saying, "That was a mistake on my part."

The Kansas City Chiefs wrapped up their preparations for the New York Giants Saturday. When safety Tyrann Mathieu spoke to the media, he was asked about a social media post that went viral this week.Responding to fan complaints about the team's 3-4 start and some of the signings by the Chiefs, both Anthony Hitchens and Mathieu responded.Hitchens told fans he was set for life and their opinions didn't matter.


'Obviously that was a mistake on my part': Tyrann Mathieu apologizes for social media comments

by: Mike Coutee Posted: / Updated: KANSAS CITY, Mo. - Kansas City Chiefs safety Tyrann Mathieu apologized Saturday for social media comments directed towards Chiefs fans. Mathieu said the Chiefs fan base "might be one of the most toxic fan bases in all of sports" in response to a comment on an Instagram post by a teammate.