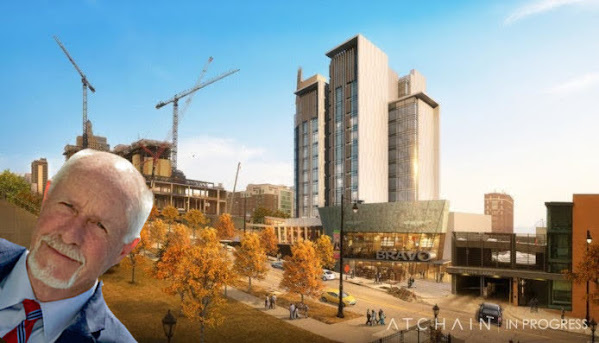 This week there was a great deal of kvetching over proposed Kansas City subsidy for a luxury hotel that ultimately failed to garner taxpayer cash.

We've heard all of the ceaseless whining about the importance of funding schools, libraries and neighborhoods before  . . . But just for Friday we wanted to share a fun fact and alternative perspective with readers who might be just a bit weary from so much familiar spin . . .

First and foremost, council dude Kevin "Yes, I'll Have Seconds" O'Neill has once again found himself on the wrong side of local labor advocates. He voted against the project and seems to be parroting talking points from the urban core that aren't playing well on the nice side of the bridge.

Unlike a great many locals amid the ongoing pandemic . . . Kansas City Labor leaders want to put their people back to work in good paying jobs and they supported this endeavor.

Despite his campaign promises and big talk about allegiance with organized labor. The council dude took the side of social justice activists rather than local construction leaders.

COUNCIL DUDE KEVIN IS A FAUX LABOR ADVOCATE!!! HE TALKS A BIG GAME ABOUT CONNECTIONS TO UNIONS FOR BRAGGING RIGHTS BUT CONSISTENTLY VOTES WITH HIS SOCIAL JUSTICE ACTIVIST FRIENDS AT CITY HALL!!!

Now back to our conversation about taxpayer subsidy . . .

All of the familiar activist rhetoric reemerged against this project but the other side of the conversation wasn't very well represented.

Now that it's a done deal . . . We'd like to share a counterpoint . . . We waited a bit because the super-rich developers can do their own bidding AND begging for taxpayer cash is the biz of consultants not any self-respecting blogger.

COVID has changed the reality for developer incentives in Kansas City.

Putting people back to work should be a priority.

Sadly, as much as our progressive friends might not like the politics of a luxury hotel . . . The "high-end" has always paid well and workers are likely to earn more by securing employment at a 5-star venue than KC's already-run-down discount convention hotel.

"For Heaven's sake we need to get over this 'Save Our Schools' anti-development nonsense. Since we've raised property taxes through the roof and plan to keep raising rates, the schools have more than enough money. They're beyond fully funded, they're overflowing with money. The library also raised taxes - They're set. Meanwhile, there's not a lot of development on the horizon and all of the angry activist ranting against every project that comes forward risks turning away business at a critical point in Kansas City's recovery."

The debate over subsidy for big money projects remains mired in pre-COVID propaganda and deserves a more serious consideration as Kansas City struggles to recover from the pandemic.

Sadly, only a humble basement blogger like TKC will point out this fact of life whilst most newsies merely take their talking points from professional protesters who seemingly encourage KC to spend big bucks on "social justice" activism rather than more traditional forms of labor.

KANSAS CITY, Mo. - Some developers have been trying to get Kansas City, Missouri, on board with a new, glamorous development called Hotel Bravo. The luxury hotel would sit on a currently empty lot near the Kauffman Center for the Performing Arts downtown.

Visit KC leaders and the executive director of the Hotel & Lodging Association of Kansas City share their insights on the market's direction. In general, although it appears to be moving in the right direction, the road to pre-pandemic levels could be a long one, they say, and the industry remains in the grip of the Delta variant.

A clear majority of the Kansas City Council voted against giving tax incentives to a proposed five-star luxury hotel near the Kauffman Center for the Performing Arts. The 145-room hotel proposal, often referred to as Hotel Bravo, has lingered around City Hall since 2019. But until Thursday it never came up for a vote.