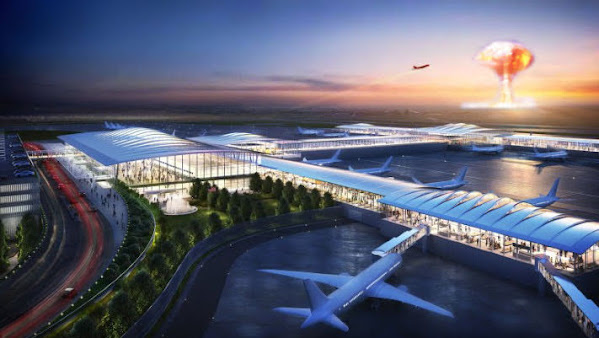 Behind the scenes all of the recent sketchy deets involving New KCI have been documented and dutifully forwarded to authorities at the top of the legal food chain.

I would feel paranoid about sharing this info but it turns out that it's now one of many Kansas City open secrets, like how nobody from Kansas City really likes K.C. Masterpiece BBQ sauce.

It's now in wide circulation and it chronicles A TON of questionable deals along with the antics of top ranking politicos, consultants, labor leaders and city hall bureaucrats.

Fun fact . . . The letter even mentions a shady episode from the Super Bowl with even more hot deets from a hotel room meeting that was recently chronicled by a local media outlet.

When the note brakes IN FULL, it'll be more than just a campaign issue . . . It becomes a warning for local suits to start running for cover -- Think of it as a nuke siren or one the funnier moments from The Gong Show.

As we've noted before . . . THE FEDS ARE WATCHING.

And so far what we've seen from New KCI is a great many corruption allegations and rampant frustration with a bidding process that has been secretive, politically charged and bungled in every way by 12th & Oak.

What we know for certain is that insiders fear so many New KCI schemes are ready to crash & burn as the disappointing airline project prepares to debut.