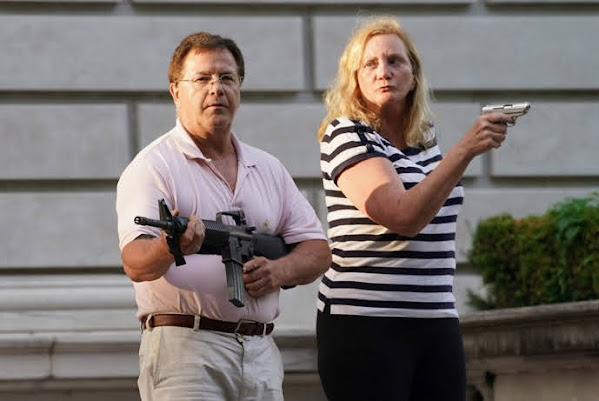 Missouri is rather permissive with gun rules.

However, political opponents of this otherwise repellent couple seemingly take objection to their brazen display of firearms.

Meanwhile, TKC has talked to a few staunch advocates of gun rights about this hot mess and most of the sentiment from REAL LIFE gun rights proponents seems to be that the hot mess is purely political.

Translation . . . Brandishing weapons, displaying exceptionally poor form and yelling at BLM isn't a good look for people who really care about the 2nd Amendment and advocate for RESPONSIBLE gun ownership.

And  yes, we know about the debate over the "broken gate" excuse that FAILED to resonate with the general public or the courts.

ST. LOUIS - A Missouri official is asking the state Supreme Court to suspend the law licenses of a St. Louis couple who gained national attention last year when they waved guns at racial injustice protesters outside their home.