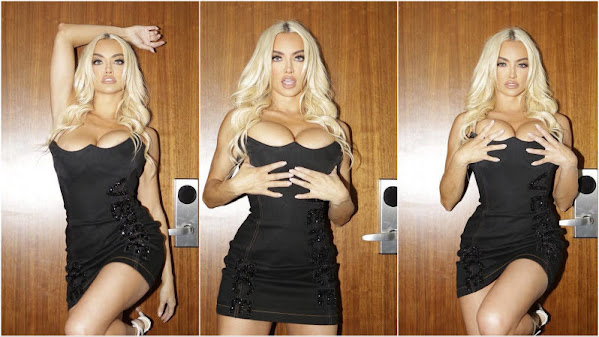 Tonight hottie Lindsey and her luxury promo work inspires us to take a peek at pop culture, community news and top headlines.

No KCMO Cash For Po-Po

Proposal to use COVID funds for KCPD on hold pending lawsuit

KANSAS CITY, Mo. - A push to restore funding discretion to the Kansas City, Missouri Police Department failed to clear its first hurdle at City Hall on Tuesday. The ordinance, proposed by First District Councilwoman Heather Hall and Second District Councilwoman Teresa Loar, would use COVID-19 relief money and give the police department $45 million as part of a one-time lump sum.

Kansas City police said a standoff in the Northland that led to a section of Interstate 29 being shut down has ended peacefully.A woman was taken into custody. Authorities said that at 12:15 p.m. officers were in the area of Northeast 46th Street and North Holmes Avenue and attempted to stop a vehicle for a traffic violation.

Children's Mercy Hospital said Tuesday it is testing more children for COVID-19.Hospital officials said some of this is the result of kids going back to school.The percentage of positive cases is dropping slightly.Last week, the hospital reported seeing the highest number of young people coming in for tests."Which is hard

by: Brian Dulle Posted: / Updated: WHITEMAN AIR FORCE BASE, Mo. - An investigation is underway after a B-2 bomber was damaged during an emergency landing Tuesday at Whiteman Air Force Base. Officials at Whiteman tell FOX4 the incident occurred around 12:30 a.m. A U.S.

Illustration by Katelyn Betz In June 2021, the Kansas City Public Library announced a new staff position that reimagines the "traditional" librarian role with a digital twist: the Wikipedian in Residence. Miranda Pratt, who graduated from the Kansas City Art Institute in 2019, is filling the post for the inaugural year-long tenure.

LINDSEY PELAS has declared war on Instagram for 'discriminating' against women. The former UFC ring girl called out the social media site after one of her busty selfies was removed. Pelas - who has natural 30HH boobs - has racked up more than 8.6million followers on her Instagram page.

Sen. James Risch, R- Idaho, claimed Tuesday that someone in the White House other than President Biden is "calling the shots." Risch made the comments during Secretary of State Antony Blinken's hearing before the Senate Committee on Foreign Relations about the U.S. military withdrawal from Afghanistan, which the senator called a "dismal failure."

Senate Democrats are proposing new legislation to overhaul voting laws after months of discussions to get all 50 of their members behind a single bill, allowing their caucus to speak with one voice on the issue even though it stands virtually no chance of becoming law.

WASHINGTON, DC - Three former U.S. intelligence operatives, who went to work as mercenary hackers for the United Arab Emirates, will pay over $1.68 million dollars to resolve federal charges of conspiring to violate hacking laws, the Justice Department announced on Tuesday.

Rep. Alexandria Ocasio-Cortez (D-N.Y.) defended her decision to attend the exclusive Met Gala Monday night amid a social media backlash. The congresswoman drew criticism from many, including several high-profile Republicans, who pointed out the dichotomy between the message emblazoned on her dress, "Tax the Rich," and the event's reported $30,000-a-head price tag.

'I Don't Want to Be Your Friend Anymore': Trump Gave Pence a Jan. 5 Ultimatum, Book Claims

In his desperation to remain in the White House after Joe Biden's win in the 2020 election, then-President Donald Trump reportedly resorted to schoolyard threats against Mike Pence to convince him to overturn the results by rejecting certification. "You can do this.

How are young people coping with climate change? The answer, according to one study, is not well, and for good reason. For a forthcoming study, researchers with the U.K.'s University of Bath and other schools spoke to 10,000 people in 10 countries, all of whom were between the ages of 16 and 25, to gauge how they feel about climate change.

You probably haven't thought about Dan Quayle in a really long time. After all, the Indiana senator-turned-much-maligned-vice-president under George H.W. Bush left national politics with exactly one thing attached to his name: He didn't know how to spell "p-o-t-a-t-o."

It's her prerogative. Britney Spears is sending a "powerful" message by deleting her Instagram amid her 13-year conservatorship, a source exclusively told Page Six on Tuesday. "She's happy and in a great place," the source said, adding, "and silence can be a powerful thing and a powerful message."

KANSAS CITY, Mo. - A Kansas City area will soon look a lot different. Crews used heavy equipment to begin demolishing several old buildings near 4th and Washington Tuesday morning. The Missouri Department of Transportation said traffic is not being impacted by the work in this area, but other construction will impact drivers as crews prepare to build the new Buck O'Neil Bridge.

A Missouri cave containing Native American artwork from more than 1,000 years ago has been sold at auction. Tuesday's move is disappointing to leaders of the Osage Nation who had hoped to buy the land to protect and preserve a site that's sacred to them.

Perhaps Kansas City Chiefs offensive coordinator Eric Bieniemy will finally get his head coaching job soon; it just may come at the college level rather than the NFL. ESPN's Adam Schefter reported league sources believe the OC will be a top candidate for the open job at USC after Chris Helton was fired from the position on Monday.

Hide Transcript Show Transcript FORECAST SO YOU'LL KNOW FIRST. THIS IS FIRST ALERT WEATHER DEVIL SAYSE WHAVE SOME RIGHT OUT THERE RIGHT NOW. OH, YEAH CHRIS. THERE ARE A FEW SHOWERS OUT THERE COLD FRONTS MADE ITS WAY THROUGH SO WE HAVE SOME RAIN.