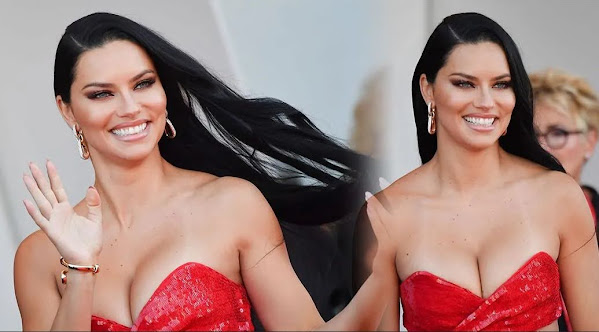 Right now we remember classic hottie Adriana who is still in top form at 40. Her body of work inspires this peek at pop culture, community news and top headlines . . .

Photo courtesy of Oddly Correct Opening Friday: Oddly Correct on Troost Following a several-month hiatus, the Kansas City coffee cornerstone Oddly Correct is officially back in business. This Friday morning, the coffee shop, roastery, and restaurant is reopening at its new location at 4141 Troost Avenue.

LEAWOOD, KS (KCTV) -- Leawood-based AMC Theatres has launched a new advertising campaign worth $25 million that features Nicole Kidman. The "AMC Theaters. We Make Movies Better." campaign appears to be an effort to get people back into seats inside their theaters. The campaign begins today in the U.S.

Patrick Mahomes shows off his love of sneakers, and signature shoe, in new ad

by: Heidi Schmidt Posted: / Updated: KANSAS CITY, Mo. - The new NFL season kicks off this week, and that means Jake from State Farm returns with new commercials. This time he runs into Chiefs Quarterback Patrick Mahomes in a new role. The NFL star plays a shoe salesman and self-proclaimed typical "sneakerhead."

Adriana Lima's Hybrid Shoes Are Sure to Be Polarizing

As the fall season creeps its way closer, you may be thinking about dusting off your boots once again and retiring your open-toe shoes. Unless you're Adriana Lima, that is, in which case you can have both at the same time.

Department of Justice preparing to sue Texas over abortion law

The Department of Justice (DOJ) is getting ready to file suit against Texas over its new law outlawing most abortions, according to sources familiar with the situation. The action from Attorney General Merrick Garland's DOJ is expected to come as early as this week, Fox News has learned.

Republican congresswoman Liz Cheney had a short answer for Donald Trump on Thursday, after the former US president endorsed a challenger for her seat in Wyoming. "Here's a sound bite for you," Cheney wrote on Twitter. "Bring it."

One benefit of never admitting you lost a presidential election -- even though, of course, you did -- is that you can just keep on acting like the president.

Paris Hilton was shocked to see Jamie Spears, the father of her close pal Britney Spears, finally concede to terminating his daughter's 13-year conservatorship. "This is such an unexpected turn," the hotel heiress, 40, said in Wednesday's episode of her "This is Paris" podcast.

Demi Moore, 58, jumps for joy in a striped bikini

Demi Moore is having a ball in a bikini. The Ghost actress, 58, took to Instagram on September 8 to share a photo of herself living her best life on a boat while sporting a striped bikini. The star jumped in the air as a skilled photographer snapped the pic at just the right time.

Now it is three days until the Kansas City Chiefs host the Cleveland Browns in Game 1 of the 2021 NFL season. Another day of the week has gone by - and according to the Chiefs, star safety Tyrann Mathieu remains on the team's Reserve/COVID-19 list.

Mild temps continue for your Thursday

Billboard #1 in September 2011 - Maroon 5 - Moves Like Jagger ft. Christina Aguilera is the song of the day and this is the OPEN THREAD for right now.