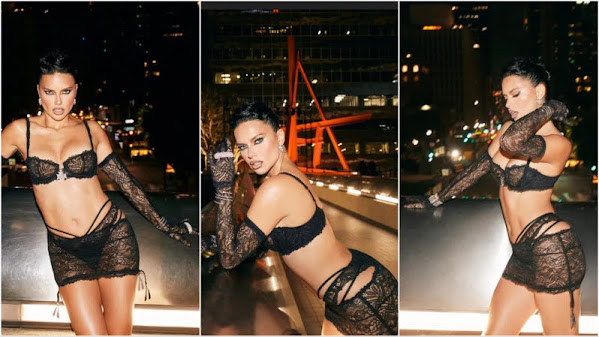 Right now we share a "moment" with hottie Adriana who has inspired this blast of pop culture, community news and top headlines.

KANSAS CITY, Mo. - One person was killed in an explosion Saturday at AM Auto Shop, according to Kansas City, Missouri, Police Department Sgt. Jonathan Rivers. Officers were dispatched to the 3800 block of E. 9th Street just before 1 p.m. on a reported explosion.

By John Sharp Neighborhood leaders and other KCMO residents who want to learn more about how city government works and how they can access city programs and services to help their neighborhoods should seriously consider participating in this fall's free Community Engagement University (CEU).

KANSAS CITY, Mo. - The Kansas City, Missouri, Police Department is investigating a shooting at a gas station near east 31st Street. Officers responded to a shooting call just before 6 a.m. on Saturday morning. A KSHB 41 News photographer reported a scene at the gas station but it wasn't immediately clear if the shooting happened there.

As COVID-19 transmission in Johnson County continues to remain high, area hospitals and their staffs are still working around the clock to treat and discharge patients, roughly a year-and-a-half into the pandemic. The struggle to endure long shifts and multiple days working can be physically taxing and mentally draining, health officials say.

Adriana Lima is proving once and for all why she is the ultimate lingerie model. The former Victoria Secret Angel traded her wings for Rihanna's Savage x Fenty line this week, posing in pieces from the brand's Vol. 3 show on Amazon Prime Video.

The Internet Has Thoughts About Adriana Lima's Cultural Appropriation

And hella inappropriate Instagram caption. Adriana Lima is getting some heat after posting racially insensitive photo to Instagram. On Thursday, the former Victoria's Secret angel posted a pic with a braided hairstyle that the internet is calling out as cultural appropriation.

Opinion: Biden's presidency comes down to this

Biden's agenda could come apart at the seams next week as Democrats face a looming government shutdown, the threat of a federal debt default and the potential implosion of either the infrastructure bill or the $3.5 trillion spending package, writes Julian Zelizer.

After the Anti-Defamation League renewed its call for Tucker Carlson to be fired from Fox News for voicing the racist "great replacement" theory about immigration, the primetime host had a pithy response: "Fuck them." Carlson was speaking to the former Fox News anchor Megyn Kelly on Sirius XM.

With just a handful of days until Germans vote in the federal election on Sunday, the latest poll shows the gap narrowing between the top two contenders. While Germany's Social Democratic Party (SPD) remains in front, a new poll by Insa for the German newspaper Bild has found the gap is narrowing.

FIRST ON FOX: Dog the Bounty Hunter arrived at Brian Laundrie's parents' home Saturday, knocked on the door and met silence - but he's already picked up a scent. "The reason I went to Mr. [Christopher] Laundrie is I carry a reputation with me," he told Fox News Digital moments later.

Her fans are reveling in her "Big Energy" single as the track seems to usher in a new season for the rapper. After dropping her "Mulatto" moniker following years of controversy, Big Latto stepped out earlier this year and announced she switched things up.

In 1997, Kate Nason, then Bleiler, found out her husband Andy Bleiler was having two affairs: one with a colleague and another with a family friend named Monica Lewinsky. Yes, that Monica. "I had suspected my then-husband was having an affair with a co-worker," Nason told The Post.

Kansas City opened the Emergency Rental Assistance Center earlier this month to help residents walk through the rental and utility assistance application process - 81% of the $12 million given to the program by the federal government has been used. About 136 people have been helped so far.

Cafe Cà Phê, known for its mobile Vietnamese cafe and specialty drinks containing flavors of ube and matcha, has built its name within the local pop-up community - either organizing or attending more than 80 events in the past 12 months, Nguyen noted. "The pop-up culture has been our bread and butter," she shared.

KANSAS CITY, Mo. - Fifteen years after it was put in place, breed-specific legislation banning pit bulls from the City of Overland Park has been repealed - partly because of a petition started by a then 17-year-old Blue Valley girl. Taylor Walton filed a petition in 2018 to repeal the ban, and thousands of people rallied in support.

A nice fall day before the heat returns

Latto - Big Energy is the song of the day and this is the OPEN THREAD for right now.