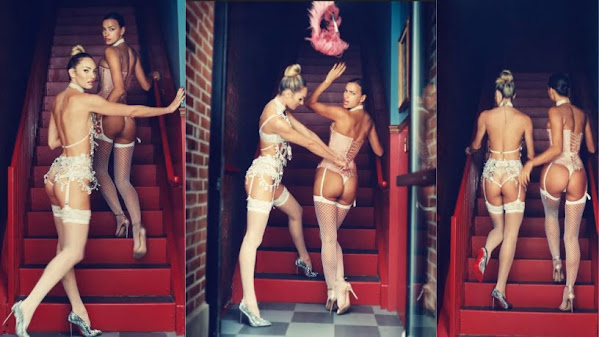 Right now we celebrate the enduring legacy of international modeling hotness along with a few worthwhile and equally educational news links from our own cowtown and beyond . . .

Even though he hadn't collected a paycheck from GM in seven months, Anthony Walker still spent days counseling his co-workers from the Fairfax Assembly and Stamping Plant, which had been since February 8. Walker is the Employee Assistance Program counselor for workers and family at the plant, a role that he says continued even when they weren't building cars.

Candice Swanepoel and Irina Shayk are the CR Parade Showgirls

Emmanuel Sanchez Monsalve What's a parade without its showgirls? Supermodels and real life best friends Candice Swanepoel and Irina Shayk take on the fifth cover release of CR's parade-themed Fall/Winter 2021 issue. The leading ladies are pulling back the velvet curtain showing a dazzling display of what happens on stage and behind the scenes.


At Least One Mahomes Earned A Victory On Sunday

Patrick Mahomes' younger brother Jackson made a splash at the Chiefs-Ravens game on Sunday night. During Baltimore's 36-35 upset of Kansas City, a couple of Ravens fans spotted Mahomes and began taunting him about their team's wild win over the Chiefs and his brother.

Royals Salvador Perez sets new record, passing Bench for most HRs in a season by a catcher

by: Heidi Schmidt, AP Wire Posted: / Updated: CLEVELAND - With a blast to left field in Cleveland on Monday afternoon, Kansas City Royals star Salvador Perez set a new record for most home runs by a catcher in a season.

Cooler temperatures on tap for your Tuesday

Hide Transcript Show Transcript evening forecast. Best rain chances next couple of hours and there's still maybe a few storms mainly to the east of the Metro by nine p.m. I think we are gonna be a lot drier than later in the evening that we go we'll have a decreasing clouds and our temperatures will cool back into those upper sixties by 10 and 11 o'clock.