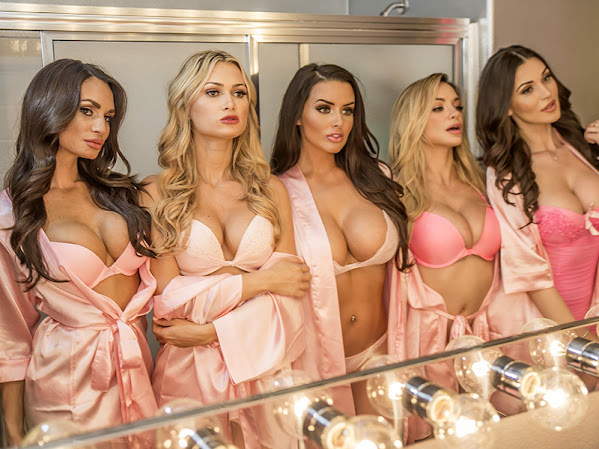 We're getting ready for a big week here at TKC and right now hottie Abby & her pals inspire this first peek at pop culture, community news and top headlines.

Check the www.TonysKansasCity.com compilation for just as much news as the morning broadcasts with absolutely NONE of the joy or friendly conversation . . .

JACKSON COUNTY, MO (KCTV) -- In October, Kevin Strickland will have a second chance to prove his innocence and possibly be freed from a life sentence in jail. He's not the only Kansas City metro man getting this rare opportunity. Keith Carnes will have the same chance this week.

Rep. Emanuel Cleaver supported House Resolution 4502, a package of government funding bills including $14.4 million in funding. This money can be used for multiple projects, like a new bridge over Brush Creek to give kids a safe way to access the 15 and the Mahomies Park.

One of the seven Republican senators who voted to convict Donald Trump at his second impeachment trial warned on Sunday that the former president's "bullying" of the party would lead to electoral defeat in next year's midterms and beyond.

Biden pushes back at Democrats on taxes

is pushing to prevent congressional Democrats from scaling back his tax proposals, as lawmakers work on a $3.5 trillion social spending package aimed at advancing the president's economic agenda. The White House and congressional Democrats both want to raise taxes on the wealthy and corporations, and strengthen tax enforcement, to pay for investments in areas such as child care, health care and climate.

UNITED NATIONS (AP) - Warning of a potential new Cold War, the head of the United Nations implored China and the United States to repair their "completely dysfunctional" relationship before problems between the two large and deeply influential countries spill over even further into the rest of the planet.

Trump says US becoming a 'cesspool of humanity' amid border crisis

​Former President Donald Trump said the country is becoming a "cesspool of humanity" as the Biden administration scrambles to handle the more than 14,000 mainly Haitian migrants living in a makeshift camp under a bridge in Texas. "​The largest number of illegal aliens in the history of our Country are pouring in by the millions.

Kaley Cuoco is flying solo. The "Flight Attendant" star, 35, walked the 2021 Emmy Awards red carpet in Los Angeles alone Sunday amid her divorce from estranged husband Karl Cook. She is nominated for Outstanding Lead Actress in a Comedy Series. Her HBO Max series is also up for Outstanding Comedy Series.

The Des Moines Social Club has a buyer, closing the chapter on an innovative nonprofit that worked to restore a historic building in downtown Des Moines but didn't find a sustainable funding model. Matt Abbott, a Kansas City, Missouri-based developer, has entered into a purchase agreement with the Des Moines Social Club Transition Board of Directors, the board announced Thursday.

SALINA, Kansas - Every year, retailers face a dreaded task: inventory. At the House of Sight and Sound in Salina, though, this was a hallowed time. Loyal customers would flock to help count records, CDs and packages of incense.

We have at least two more days of very warm and humid conditions before a cold front arrives. This afternoon look for partly to mostly sunny skies with a high near 88 degrees in Kansas City. There could be a few locations that reach 90 degrees again this afternoon as well.

Cuco - Under The Sun is the song of the day and this is the OPEN THREAD for right now.