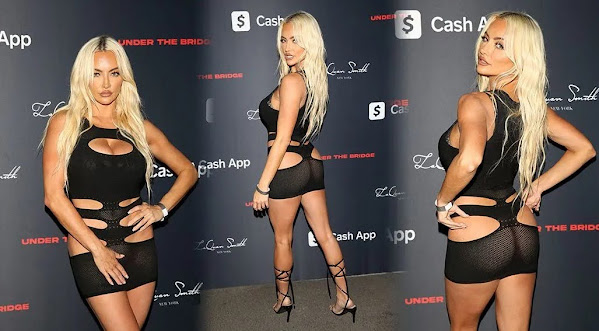 Right now hottie Lindsey and her body of work offers us an educational view of how the promo and marketing game rule the social media discourse. Meanwhile, her Insta-goodness inspires this peek at pop culture, community news and top headlines.

After a string of fires at an abandoned school building in the past 18 months, the property owner has agreed to hire a patrolling service and demolition company. North American Islamic Trust has hired Metro Public Safety to monitor the building and J.E. Dunn Construction for the eventual demolition, according to NAIT's spokesperson, attorney Azam Nizamuddin.

In an update from the Federal Reserve Bank of Kansas City earlier this month ("Financing of Ag Production Loans Eases Further"), Nathan Kauffman and Ty Kreitman stated that, "Farm debt at commercial banks continued to ease in the second quarter."

KC Streetcar tack repair work in Downtown KC will continue this week, Sept 20 - 24, and will be done at night only, between the hours of 10 p.m. - 5 a.m. This work will take place on Main Street between 7th Street and Petticoat.

The property manager for a former mobile home park near the Truman Sports Complex on Monday promised to clean up trash and debris on the property after an email from KMBC 9 Investigates.The former Stonecroft Village Mobile Home Village at 4900 Raytown Road has tires, trash, brush, and debris lining the property.

WICHITA, Kan. - Gabby Petito made a stop in Kansas while on a cross-country journey in a converted camper van with her boyfriend, Brian Laundrie, to visit national parks in the U.S. West. The trip started July 2 from New York.

KANSAS CITY, MO (KCTV) -- Many car dealerships across the Kansas City metro and the country are experiencing unprecedented inventory shortages for both new and used vehicles. "I think it's probably going to last for at least the next three years," Grant White, owner of Heartland Chrysler Jeep Dodge Ram in Excelsior Springs said.

Dan Bilzerian is known for his pretty wild lifestyle, travelling the world on private jets, drinking the most expensive champagne and partying with a bunch of beautiful women. But is it really as incredible as it looks on social media?

Opinion | Biden Wants to Convince the U.N. That America Is Back. The World Isn't So Sure.

Yet the Biden team has also demonstrated that there are limits to its multilateral instincts. It has sidelined the U.N. and disregarded the views of allies during crises in the Middle East and Afghanistan. It has made clear that competition with China is a top priority, raising questions about whether and how the two powers can cooperate in international institutions.

Liberals are insisting that the two key components of Biden's agenda - a $1.2 trillion infrastructure bill that has Republican support and a Democratic-only $3.5 trillion social spending package - be passed in tandem to ensure the success of both.

WASHINGTON - The Biden administration said the U.S. would take in 125,000 refugees and their families next year, fulfilling an earlier pledge to raise a cap that had been cut to a historic low under his predecessor.

The White House endorsed a bill Monday that seeks to ensure abortion access. Why it matters: While the Supreme Court seems to be opening the door to new state laws significantly restricting reproductive health choices, the Biden administration changed its stance on the Women's Health Protection Act, having previously said it would look for other ways to codify Roe v.

Covid-19 has now killed as many Americans as the 1918-19 flu pandemic - more than 675,000. The US population a century ago was just one-third of what it is today, meaning the flu cut a much bigger, more lethal swath through the country.

The announcement comes in the wake of a dire warning from a UN climate panel. Nearly 90 new companies -- including multinational corporate giant Procter & Gamble, tech behemoth HP and cloud-computing titan Salesforce -- have signed onto the Climate Pledge, an Amazon-backed initiative that asks firms to commit to achieving net-zero carbon emissions by 2040.


Progressives Pushed Back Across The Border

After a long night of counting, Justin Trudeau's Liberal Party is projected to have won Monday's snap general election. The prime minister thanked voters for returning him to power for a third time. After weeks of campaigning - and millions of dollars spent - the initial reaction to the Canadian election results following Justin Trudeau's decision to call an early election has been somewhat scathing.

Britney Spears Returns to Instagram, Couldn't Stay Away Too Long

Britney Spears ' getaway with Sam Asghari wasn't just a celebration of their engagement ... it was also the perfect reason for her to get back on Instagram. The singer posted 2 identical photos -- one color, one black and white -- on Monday and said they were taken during a weekend trip to Palm Springs to celebrate their commitment to get married.

April 5. That was the last day that the Kansas City Royals defeated Cleveland, against whom they had lost 11 consecutive games over a span of five months. But tonight, the Royals managed to get not one, but two wins against Cleveland.

Become a member of The Bridge today only and enter to win two front row tickets to see Patton Oswalt at the Uptown Theater on Friday, Dec. 3!

Garbage is paranoid. // Photo by Chris Ortiz Alanis Morissette's 25th-anniversary tour of Jagged Little Pill has been a tour-de-force... of a tour. The 1996 come-back-to-life roving band of Morissette, Garbage, and Liz Phair seemed like an impossible throwback. And indeed, it was. Phair was out, to be replaced by Cat Power.

Keystone United Methodist church reflects on next steps after fire

KANSAS CITY, Mo. - Firefighters say the cause behind the Keystone United Methodist church fire was linked to a construction crew working on the roof. The church has been in south Kansas City for 113 years before smoke was seen billowing out of it on Monday.

A Storm Track 5 Weather Alert has been posted for your Monday. We are tracking a 70% chance for scattered showers and storms. Best chances for rain will be late afternoon through tonight with a high temperature near 86. Drier skies return for Tuesday along with some much cooler air!

Mac Miller - Colors and Shapes is the song of the day and this is the OPEN THREAD for right now.