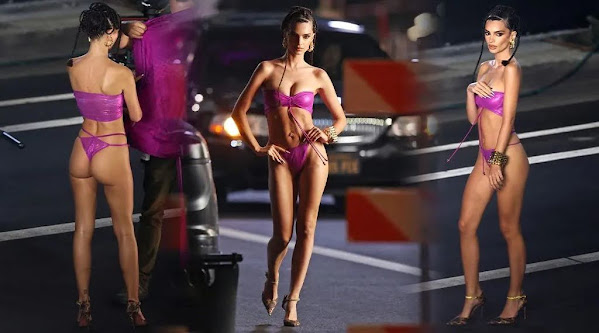 Right now we're transfixed by the return of EmRata to the catwalk and this inspires our peek at pop culture, community news and top headlines.

KANSAS CITY, Mo. - One million COVID-19 vaccinations, as Kansas City passes the milestone this week, local employers ponder how to reach the next step. That next step? Two million vaccinations, striving to reach herd immunity. But sluggish vaccination rates could accelerate as more businesses start requiring shots for their employees.

KANSAS CITY, Mo. - Low oxygen rates and fatigue to the extreme, even after COVID-19 patients leave the hospital, the battle is not over. Federal health officials continue to stress that a rising number of patients are not having smooth recoveries while acknowledging that the delta variant is leading to a new spike in the COVID-19 death toll.


Fez Up With Crime

JACKSON COUNTY, MO (KCTV) --- The Jackson County Shrine Club is hopeful that you could help them find some items that were stolen from them. In the past few weeks, there have been four break-ins at the club, resulting in the loss of various items. The first theft resulted in the loss of two mini bikes and a "drifter" bike.

KANSAS CITY, Mo. - A slate of 19 Kansas City-area artists has been selected in the final call for artists for the new Kansas City International Airport terminal. The Kansas City, Missouri, Aviation Department announced the finalists Friday.


Hotness Walks It Off

Emily Ratajkowski is strutting her stuff. The 30-year-old model was spotted participating in Rihanna's third Savage X Fenty fashion show on Tuesday night in Los Angeles, donning a barely-there pink bikini. The bottom half of the swimsuit had a high waistline while the top half had no straps.


Working Against The Middle

Biden Underwater as Afghanistan, Coronavirus Chip Away at President's Popularity

It's been a rough few weeks for President Joe Biden, and it's starting to show up in his approval ratings, with a new poll showing a majority of the country is unhappy with the job Biden is doing. The Washington Post-ABC survey, taken as Biden was under the height of criticism for the U.S.

Explainer: What is the Texas abortion ban and why does it matter?

On September 1, 2021, one of America's most restrictive abortion laws came into effect. What's happening and where do women's rights go from here?

Horn-iest Jan. 6 Rioter Cuts a Deal With the Feds

​​The "QAnon Shaman"-who notoriously stormed the Capitol on Jan. 6 carrying a spear and a bullhorn and wearing a horned headpiece made of coyote skin -has cut a plea deal with the feds Jacob Chansley, 33, was arrested three days after the riots and charged with civil disorder, obstruction of an official proceeding, disorderly conduct in a restricted building, and demonstrating in a Capitol building.

Fearful Of The Taliban, At-Risk Afghans Urgently Seek A Way Out

When the Taliban took control of Afghanistan, a former Afghan army colonel named Mohammed became part of the massive crush of people trying to flee at the Kabul airport last week. Mohammed and his family - a wife and five children - waited for hours to reach a Taliban checkpoint outside the airport.


Move Over Delta, Mu Is Meaner

As the Delta variant of COVID-19 continues its deadly sweep across the U.S., officials say that they are keeping a "very close eye" on a new variant that may be able to bypass existing coronavirus antibodies. Dr. Anthony Fauci, the director of the National Institute of Allergy and Infectious Diseases, said on Thursday that the U.S.

Review: 'Cinderella' tries to update the fairy tale, but the shoe doesn't quite fit

Trying to retrofit "Cinderella" with a feminist sensibility is a big-time challenge, and despite ample energy and the sing-along benefits of a jukebox musical, a new version starring Camila Cabello can't crack that code. Premiering on Amazon, the movie mostly feels like Disney Channel fare with a pinch of "Moulin Rouge," a colorful distraction lacking enough magic to fulfill dreams or wishes.

Welcome to Paradise (Garden Club): 'The world might be on fire, but this plant is doing great'

"A lot of people don't get the opportunity to really explore outside of the Midwest or don't have the natural curiosity to go do that, so we want to bring a little bit of that back for the people who aren't able," said Jessica Teliczan, co-owner of Crossroads-based, succulent-inspired Paradise Garden Club.

KANSAS CITY, Mo. - While working as a government contractor in Afghanistan eight years ago, Kansas City Councilwoman Teresa Loar developed a bond with a young Afghan girl selling trinkets on the streets. "She would come and sell her wares, her bracelets, scarves and whatever she had to sell on the street," Loar told FOX4.

Local artist draws fallen soldiers as tribute to their service

INDEPENDENCE, MO (KCTV) -- As the last American soldier left Afghanistan, a local artist was busy working on a tribute to those who didn't make it home alive. Last week, terrorists bombed areas outside Kabul Airport where evacuations were taking place. Some American service members ranging from 20 to 31 years old flew home in caskets.

The Pitch approved calendar of September events is here

KANSAS CITY, Mo. - Pat Clarke began efforts to renovate renovate Satchel Paige Stadium two years ago, and though progress has been slow, the Kansas City, Missouri, community leader has no intention of giving up. He organized a concert, All Good in the Hood Funkfest, at the stadium planned for Labor Day weekend.

Hide Transcript Show Transcript MANY ACCIDENTS DUE TO HYDROPLANING. WE'VE HAD TWO TO THREE AND A HALF INCHES OF RAIN IN THE METRO. SAYS HAD OVER FOUR INCHES OF RAIN, AND IT' SSTILL COMING DOWN THE HEAVIEST RAIN MOVING RIGHT ALGON THE MISSOURI RIVER GNGOI INTO RAY COUNTY GOING INTO LAFAYETTE COUNTY, BUT STILL POURING IN PTSAR OF JACKSON AND JOHNSON COUNTIES AS WELLN I OUR FORECAST TODAY.

Camila Cabello - Million To One is the song of the day and this is the OPEN THREAD for right now.