Kansas City Crime Scene: You Only Hurt The Ones You Love & Vice Versa 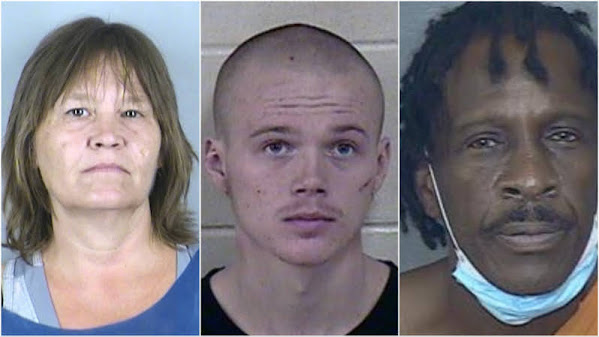 Right now we share a quick compilation of Kansas City metro crime scene news on all manner of misdeeds including CONVICTIONS and ALLEGED crime . . . In addition to more deets on police action and legal battles.

WARSAW, Mo. - A western Missouri woman who spent nearly seven years behind bars awaiting trial for the 2012 shooting death of her husband has been found guilty. Missouri court records show a Clay County jury on Monday convicted Viola Bowman, 60, of first-degree murder in the killing of 53-year-old Albert "Rusty" Bowman in their Kansas City home on Nov.

On Tuesday, a Jackson County judge sentenced a 21-year-old Kansas City man to 20 years in state prison for his role in the fatal shooting of Riley McCrackin.The shooting took place outside a pool hall in Raytown, Missouri, on March 4, 2019.Logan England, 21, pleaded guilty to murder in the second degree and armed criminal action.

JACKSON COUNTY, MO (KCTV) -- A Kansas City man has been sentenced to 30 years in prison for fatally shooting his wife outside an Independence home last summer. According to the Jackson County Prosecutor's Office, a jury convicted 64-year-old Larnell McDonald of involuntary manslaughter and armed criminal action this April.


Roc Nation explains why it's focusing on KCKPD

The Clay County Sheriff's Office said Tuesday that three people found dead in a home in Glenaire in July died from natural causes. The sheriff's office said that deputies were called to the home in the 400 block of Wherritt Lane by a neighbor, who reported not seeing one of the residents for a long time.Deputies found Roger Wilfong, 66, his sister Mary Wilfong, 67, and their 99-year-old mother, Virginia King, dead inside.

KANSAS CITY, Mo. - Investigators looking into a weekend arson at a Kansas City, Missouri church need help finding the person responsible for setting it. Agents with the Bureau of Alcohol, Tobacco, Firearms and Explosives said they are following up on some very strong leads as they investigate the arson at Harlem Baptist Church.

KANSAS CITY, Mo. -- When the federal government in 2015 awarded Igiugig a grant for its own tugboat, leaders in the Southwest Alaska village proclaimed it a step toward "a sustainable local economy, creating jobs and training the local workforce."

KANSAS CITY, Mo. - The family of a Kansas City, Missouri, homicide victim said they've waited more than a year for the headstone for his grave site. Sherese Matthews said this is despite paying for it, and their countless phone calls and emails to follow-up.